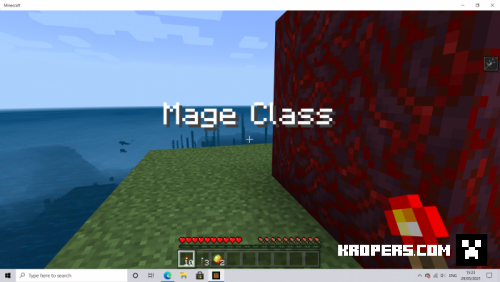 markus
19:37, 06 July 2021
131
0
This is the second version of the Crimzonn Origins Addon, this addon introduces 14 classes (such as warrior, mage, thief) and 9 origins, this focuses more on the classes for a couple of different reasons which might be explained in the discord

The first class is the Wariio
The warrior spawns with an iron sword and a shield, has permanent resistance, speed, and strength, and all swords you hold get sharpness, but you have mining fatigue and are blinded for a bit after being near an arrow

Spawns with bow (all bows have power and infinity) and an arrow, has strength after being near an arrow, and gets double oak logs, but has weakness

Pictures of Mage Class
The mage spawns with some items that you use for spells such as summoning lightning, evocation fangs, and one can heal you, but you have weakness

The summoner starts with a zombie head, and by throwing that down you summon a zombie horde, this also works with skeletons, and wither skeletons, but for cave spider you need a fermented spider eye, for zombie pigmen you need a golden sword, and for piglin brutes you need a golden axe, you also are invisible near these mobs, but you have weakness

As an alchemist you spawn with some potion ingredients to throw down, such as throwing down a fermented spider eye to get a speed potion, but you cannot wear a chestplate

Forger class spawns with an axe, chestplate, and some anvils, the forgers can throw down an emerald block to get an iron block, but they have slowness

The miner class spawns with a pickaxe and torches, has night vision on stone, has hunger and haste, higher haste on iron ore, you can get some enchants by holding items and when you destroy iron, gold, and ancient debris, you get 2x what you normally would

As a farmer you spawn with a hoe, some seeds, and some fences, you get bread by breaking haybales, when you stand on coarse dirt it turns to farmland, has resistance and fire resistance, but you have permanent leather boots and a chainmail helmet

The geologist spawns with andesite, diorite, and granite, throwing these down spawn structures, you get jump boost on dirt, and you can spawn gravel when standing on diamond ore

As an engineer you spawn with some redstone components, you have speed, blindness, regen, saturation, and you have some auto enchants, You can also throw down a redstone block for temporary strength or an iron block to summon an iron golem

Thief Class:
The thief has permament leather boots, but clears some items in nearby players inventories and gets golden nuggets from being near players

The chef spawns with a spoon and a knife, some smokers and fuel, has a permanent iron helmet and cannot wear a chestplate, they auto enchant swords with fire aspect, they can also throw down some food related items for specific purposes

The enforcer freezes nearby people, (that's it)

Now onto the origins (which are weaker in this one)

The bee origin spawns with a sword, and has slow falling and slowness in air, they are supposed to regen when looking at flowers (only works sometimes), they can also throw down sugar for strength, bottles to convert them into honey bottles, and ghast tears to try and sting people in the area

The sunborn origin spawns with a flint and stell, is fire immune, and supposed to regenerate when looking at lava

As a moonbeam origin you have permanent hunger effect, but by throwing down a phantom membrane you can summon a phantom

The starborn origin has blindness, but can summon lightning when on gold blocks

Snowborns have the ability to turn water into ice, but are slow

The crab origins can breathe underwater, and have speed

As a leavian origin, you are invisible when on grass blocks, and you do not need to eat as you are a forest based creature

The final origin, Dragon. As a dragonian origin you cannot take fall damage since you are used to landing

Download the behavior pack from the above link and apply it to your world (you need cheats activated), do /function start and pick your origin or class, throw it on the ground and play!