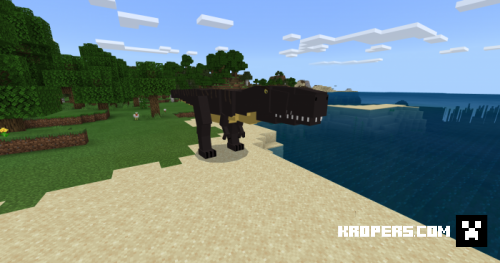 Tyrannosaurus Rex a.k.a "King of Dinosaurus" - if isn't a biggest dinosaur , but one of the most famous after raptors. Tyrannosaurus can be found, rarely spawning in taiga biome, where it's prefer to relaxing most of time.
But if someone, like fox, wolf, player and etc. will disturb it - it will moving towards target until don't catch and kill it (sometimes , when it caught target - it's roaring).
Tyrannosaurus laying eggs on breed. From them will hatch a small ones , that you can tame with using any type of meat (expect for fish and cooked ones).
When dinosaur tamed - feed it to grow up. When it's finally grew - put saddle to ride it!
Also you can put a chest (like a llama) and put thigs from your inventory to it.
On death - tyrannosaur drop his meat, that you can cook.
Hamsters
Hamsters is a cute looking mob, that can be found in plains, taiga and flower forest. You can meet a variable types of hamsters (including sizes, textures and etc.). For the moment they not dop anything special, but soon I'll try to make them dropping something intersting.
Hamsters will be a big lovers of hay blocks, wheat, wheat crops and any type of seeds - items, that you can tame them (expect for crops). Wild ones will be a prey for ocelots, baby tyrannosaurus, wolfs, foxes and phantoms.