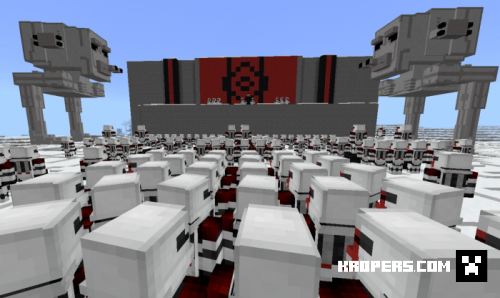 markus
22:14, 04 July 2021
133
0
A long time ago in a galaxy very, very far away ...
Star Wars Addon by Doctor Joker
To start this addon it must be played in experimental mode, since it adds to minecraft different weapons, mobs and textures based on the star wars movie, you will find these new mobs very easy since they appear in all biomes and they will always want to kill you


HOW DOES THIS ADDON WORK?
All these new mobs are spawned naturally in all biomes, YOUR WORLD WITH THIS ADDON WILL BE A PLANET DOMINATED BY THE FIRST ORDER, but it will be defended by the Resistance.

v1.2
New map based on planet scarif from rogue one!!!


Performance glitches?
If the performance in the game is difficult, remove in world obtions "mob generation" and put this command in the chat bar "/ Kill @ e" that way it will make the game more fluid. But you must put the mobs yourself personally
If you download the official map, you will be able to play this addon without bad performance or anything like that

New weapons:
Features:
Damage:10 all Lightsaber
You will not be able to craft the lightsabers, you must defeat the villains or heroes if you want a lightsaber

Darth sidius ( Emperor Palpatine)
The most powerful Sith in the galaxy, very strong and skilled, uses his maximum power from the dark side to defeat any of his enemies, including you.

Darth Vader
powerful, immune, father of darkness, the most powerful villain of minecraft has arrived and is called DARTH VADER

Boba Fett
this bounty hunter will always look for you, since darth vader put a price on your head

Features:
Health: 100
equip: Jetpack
Damage: 10
scale: 1
attack: player, rancor, villager, resistance, and more..
AT-ST:
These machines are very big and dangerous, they will always want to kill you, be very careful since this is not alone, this machine just spawned 5 stormtroopers will come out of it


It has behaviors and sounds equal to those of the movies, making it a totally incredible mob, be very careful and equip yourself with a blaster to defeat him.


Be very careful when facing this, I suggest that if you do not have a blaster in hand or an armor run or avoid it since remember that this is not alone

Tie Fighter:
This ship is one of the most dangerous of the addon, it is too fast both to move and to attack you, it will always attack its target at a very long distance


Has a very long sight can shoot from very far away
scale: 9.o
attack: player, rancor, villager, resistance, and more...


In the new map you can see these new mobs better

Stormtrooper:
This trooper soldier is the weakest of this addon, of course if you have a diamond armor, only one is easy, but many troopers is an impossible mission


On the map this is the main villain of the game, of course there are too many and you will have to defeat them

Anakin Skywalker
the chosen one, powerful, strong, skilled, everything a Jedi warrior requires, but he has a dark side

Rey
king a powerful woman, skillful and sensitive with the force will support you to defeat the first order

Luke Skywalker
Jedi knight, the true chosen one, strong and intelligent, luke could be your teacher in this way, talent without training is useless

Ahsoka Tano
Padawan, but not Jedi, very agile this young Padawan will help you fight against the dark

Millenium Falcon:
This great ship navigated by HAN SOLO AND CHEWBACCA is the most powerful ship of the addon

HAN SOLO AND CHEWBACCA:
The two great heroes of the entire galaxy, here in this addon you will always find them together, They are inseparable

X wing:
this ship just like the millennium falcon will help you destroy all minecraft enemies


This ship is the main enemy ship of the tie fighters.

Rebel:
The rebel soldier is the main enemy of the stormtroopers but they have the characteristic of being tamed and following your battle orders


if you tame enough rebels you can make an army

1. Look and read this page completely, if you have performance problems there it says how to solve it
2. DOWNLOAD Star Wars Addon by Doctor Joker
3. press the .mcaddon file
4. Use it in experimental mode
5. is ready to play