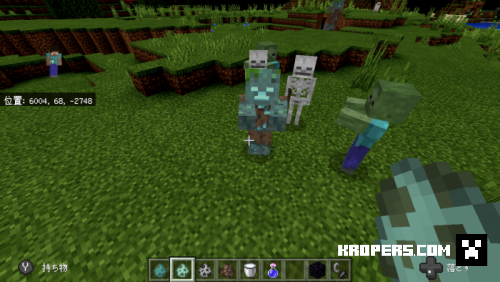 markus
09:13, 28 August 2022
308
0
Want to increase the difficulty level?This add-on greatly increases the difficulty of the game.Can you clear this difficulty?There are many new elements, all of which hurt you!Enjoy super difficult survival!

This is a video of this add-on. Please watch it.
Let me introduce you.

First, the HP, speed, and attack power of most monsters will be doubled!
It seems to be difficult to beat it normally!

In addition, the monsters will not burn in the sunlight!
Please have a look at the photo. It's noon. But zombies and skeletons aren't burning.
I can't rest assured even if there is the sun.
Villager zombies burn.
This is to prevent you from being treated from a zombie condition.
Also, some monsters are pretty strong.
Weapons for Vex and Vindicator are now made of diamonds. Naturally, the attack power is also increasing.

Enderman will attack without eye contact! Of course, the status is also doubled.
Witches now shoot arrows and throw potions three times in a row! It is dangerous because there is no chance.

Blaze will move more violently, will no longer emit particles when attacking, and will fire 5 consecutive flames!
Can you get Blaze Rod?

HP 50
Speed 0.4
Appears in forest biomes.
It moves slowly but is blindness when attacked.
Don't be attacked at night! I'll see why later ...

HP 72
Speed 1
Appears in the Dark Oak Biome.
Possessing a Netherite ax, it will be poisoned if attacked.
Dangerous if you meet!

HP 70
Speed 0.7
Appears in the savanna biome.
He has a Netherite sword. He is affected by Wither when attacked.
He attacks all animals, but escapes from monsters.
Dangerous but a little safe?

Master mode also changes the world itself.
First, the world gets darker overall.
There is no problem in the daytime.

Master mode is dangerous at night! Comparing day and night, you can hardly see the ground at night! Therefore, there is a risk of falling!
Don't forget the torch.

Already in the photo, TNT trees will be spawned.
Stop the explosion at all costs! Otherwise, the world may die ...
Also, the water becomes opaque. So I can't see the water from the outside.
Underwater is slightly less transparent.

Also, the sky is a little dark. There is no particular effect here.
When you drink a night-vision potion ...?

This add-on is installed as soon as you click on the file.