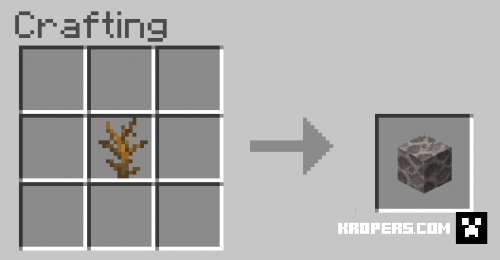 markus
17:03, 01 July 2021
96
0
Have you ever felt lonely in your Minecraft: PE world? Well, those days are finally over with the help of a brand new "mob" - Spongecube square! It's not squarepants because he has no pants.

There are two ways to get a spongecube square - an alive and a dead one. First the simple one - the dead spongecube square. It's just a decorative block
First you must find a dead brain coral (or use this recipe, because i felt that finding a coral is too much hassle for a block that does nothing, so I made it easier:
Now you can make a dead brain:
Great, you have a braindead dead i mean brain! Now, the final step:
And here it is:
It looks the same as the alive spongecube. This block is for people who want the block but don't want it to have any AI

AND NOW THE ALIVE ONE!

IMPORTANT! FOR THE ALIVE SPONGECUBE TO WORK, YOU MUST SET UP A REPEATING COMMAND BLOCK (to get it type "/give @s command_block") WITH THIS COMMAND: function spongetick

AND DON'T FORGET TO TURN THE BLOCK ON!
The steps are very similar. First you must make a brain (this time a living one). Also there's no reecipe for the brain coral, so you'll have to find one yourself!
Great, now you have a brain (hehe). Use a similar recipe to make the spongecube
And yeah, it's in an Amazon box
That's how you'll be able to transport the spongecube
Don't mind the scoreboard on the right, it won't be visible in game
To "activate" him you must just break the box
Voila! Now just wait. If you're in radius of max. 10 blocks, then from time to time you'll hear him laugh and he'll say something in chat. He might even give you something 0__0 but I won't spoil everything here. Here are some examples tho:
Don't worry, there won't be this "successfully executed 25 function entries" when you'll play it. I just wanted to speed up the process to get those screenshots. I can't really tell you how long you'll have to wait, it's all based on random. If you feel that it's to long, feel free to comment of contact me on Twitter
When you brake it you'll get the amazon box back. now you can move your spongfriend!

BEFORE PLAYING PLACE A COMMAND BLOCK IN YOUR WORLD AND TYPE IN "function spongetick" AND DON'T FORGET TO POWER THE COMMAND BLOCK!