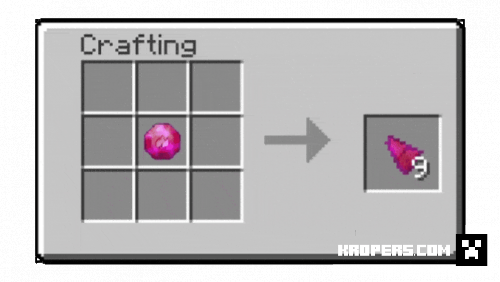 markus
09:18, 21 August 2022
380
0
Mystic Weapon is a powerful magical weapon which have their own special abilities. There are 3 kinds of Mystic Weapon and an Armor each weapon and armor have element type and its power is according to that element.

Elements stones are unique items that use for crafting different Mystic Weapon. Elements Stones are very unique and expensive, you can have a chance to buy them in wandering trader or have chance to get them in some specific loot such as unique chest loot like burried treasure, chest in some village or by some entity's drop loot.
The color of element stones
There are 7 different types of element stone: earth, fire, water, ice, wind, light & lightning. Each type of stone can break into 9 different shards using crafting table.
You can use each element stone and element stone shard to craft different Mystic Weapons and Armors. There are 3 different kinds of mystic weapons which are staff, swords & battleaxes. For each weapons and armors there are 6 different variations, one element for each kind.

All Weapons and Amors have skills, most has passive skill and some has active skill. Passive skill triggers automatically when:
And active skill can trigger by player by:
Active Skill has cooldown thus can only be used between that time interval

Mystic Swords are melee type weapon that deals high damage. Some sword has active skill, some has passive, some both have passive and active skill.
Mystic Swords is also sword thus you can able to enchant it with any applicable enchanting for sword.
They can craft like vanilla swords just use corresponding element stone shard.
Mystic Swords can craft like vanilla swords just use corresponding element stone shard just like below
Cataclysm Blade (Earth)
Passive Skill: A sword that causes explosion to a target thus it causes destruction of blocks and burn the area.
Blazing Sword (Fire)
Passive Skill: A sword that set target on fire, if target has fire resistance effect this sword will remove it.
Active Skill: Shoot fireball in designated direction that burn the entities and block it hits
Scarlet Blade (Water)
Passive: The strongest mystic weapon that deals very high damage but has low durability. A user will lifesteal (replenish  health) when dealing damage to a target.
Shattered Blade (Ice)
Passive Skill: There's a 30% chance to slow a target when hit.
Active Skill: Place a temporary ice wall in front of a user to protect yourself from any incoming projectiles and to block enemies to your way.
Scimitar Crusader (Wind)
Passive Skill: A sword that levitate a target then will drop it that causes additional fall damage.
Active Skill: Give user a slow falling effect which last for 10 seconds
Lightning Sword (Lighting)
Passive Skill: A sword that strike lightning to a target and give fire resistance effect to a user for short period of time to prevent burning from its impact.
Blade of Flicker (Light)
Active Skill: A sword that can instantly teleport a user to a designated direction with 6 blocks distance.

Battleaxe deal higher damage than swords and have higher durability but its abilities is not powerful as other they just giving a target with negative effects or positive effects to a user.
Battleaxes can also be used to break any wood type block faster, fast as diamond axe.
Battleaxes are also axe thus you can able to enchant it with any applicable enchanting for axe.
Battleaxes can craft like vanilla axes, just use corresponding element stone shards.
Venom Axe (Earth)
A venomous axe which give additional continuous damage to a target using its poisonous blade.
Death SwiftAxe (Lightning)
A lightning power allows you to travel with a speed of lightning thus it gives a user speed effect to easily distance yourself in combat.
Cerulean Edge (Water)
Feel like you're underwater with its element type of power thus it will make you slower to attack and mine.
Frozen Axe (Ice)
An ice element type of power which can decrease your movement speed with its freezing power
Gravity Axe (Wind)
A wind element type of power of this axe will levitate you through the air and then fall back to the ground which causes additional damage.
Bloodcursed Edge (Fire)
A blade of axes could hurt you badly thus it set target with wither effect that causes additional continuous damage like burning fire.
Cresent Axe (Light)
A light element type which will give night vision effect to a user

Mystic Armors are gear protection to reduce incoming damages, each armors have different element type for each piece.
When a wearer wear full set of same element type of armour, the wearer will trigger the skill of the armor, the skill is depend on what type of element it is.
Mystic Armors are also armor thus you can able to enchant them with applicable enchantment for armor for each piece.
Mystic Armors can be craft using element stone shards with the same pattern recipe as vanilla, just use corresponding element stones shards just like below.
Obstruction Armor (Earth)
Firaga Armor (Fire)
Respiration Armor (Water)
Featherlight Armor (Wind)
Divine Armor (Light)
Bloodlust Armor (Lightning)
Glacial Armors (Ice)

Where can you get Element Stones?

Buy them in Wandering Trader
You can purchased element stones for 12 emeralds, wandering trader sell upto two different kinds of stone and can purchase upto 4 times
You can also loot them in following places/entities and here are the odds of chances to get them
Earth Stone
Water Stone
Ice Stone
Wind Stone
Light Stone
Lightning Stone
Fire Stone
Random

Added:
-Ice Stone - Can be found on Igloo, underwater ruin and snow villages
-Ice Stone Shard - Can be craft from Ice Stone
-Thawed Scepter - Encases all nearby entities in ice and slow them all for few seconds. The ice will eventually destroyed after a few seconds
-Shattered Blade - Place a temporary ice wall in front of a user for defense
-Frozen Axe - Give slowness effect to target for a short period of time
-Glacial Armors - When wear a full set of this armor a payer will gain Frost Walker effect. This Frost Walker effect will not destroy the ice as long as you're stepping on it, unlike the frost walker of enchanting.
Changes:
-Bloodlust Armors (Lightning) will now also give speed effect, it now give strength and speed effect
-Crescent Axe will now give Night Vision to a user instead of Blindness effect to a target
-Increases the chance of getting Element Stones, and added more places where they can able to get
-In Igloo you can now get Ice stone instead of Water Stone
Minor Changes:
-New Icon Pack
-Water Stone & Water Stone Shard texture became darker
-The text "Water" in every equipment were change to color blue instead of cyan

Installation
The following experiments option is required to enabled to use the addon, otherwise will not work!
Install both behavior and resource pack to work.