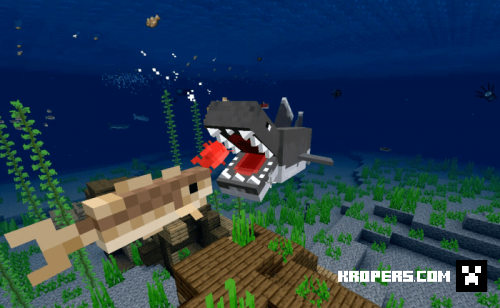 markus
18:57, 28 June 2021
84
0
Be afraid to go into the water. You never know what might be lurking. Waiting..... What's wrong with land anyway?? Nice, flat, sharkless land. Lovely. We now have, for your enjoyment, Tiger sharks, Whale sharks, Whitefin sharks, and Great White sharks (of course).

Smallest, least aggressive of the bunch. Hardly ever chases the Player around. Found in non-frozen ocean biomes

Larger than the whitefin, generally speedier. Comes in a couple of different variants. The least common of which may spawn as a 'jaws' variant, which is bad news for most entities, especially.... you. Also found in non-frozen ocean biomes.

Definitely great, definitely(ish) white, and most definitely a shark. The largest and most aggressive of the bunch, and the most likely to become a 'jaws' variant. You'll know when these appear because you'll see a boss bar popup (thanks dinoking for the suggestion) moments before you get eaten. Again, found in non-frozen ocean biomes.

Find these slippery blue devils in warm ocean. Now bigger than ever, thanks to the "Guest" suggestions below, I clearly didn't research their size. They swim around and .... swim more! And then they swim again! About one in 40 will be very big, very angry, and very hungry. Plankton will definitely not be enough, a Player arm or leg might do the job though.