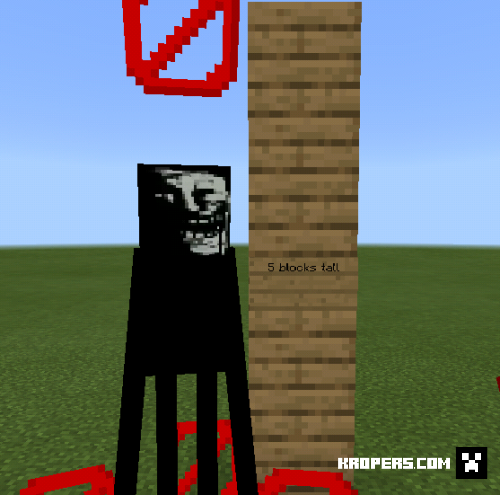 The trollge add-on bring to you: 2 Items and 2 entities (this can be changed in the future)

The beast or better known as the Trollge, he is 5 blocks tall.
The Trollge cannot die in any way as mentioned before, and the swords cant make much, if you don't have armor he will one shot you (hitting you and getting you 3 hearts and the either killing you) even with netherite armor stills being a big danger to the player, even worse, it can kill the full netherite player with 5 or 6 hits.
The image above shows the player with full netherite and the Trollge mad killing him.
In the other image above we can see the player without armor getting hit ONCE and almost dying.
The egg of the Trollge looks like this:

How we can kill him?

Is almost impossible to kill him, if he is the double of fastest than you that is a big problem, because of how fast he goes you can't hit him, and the fire can't kill him, so the lava can't do much, the water will not do anything, the best thing you could do is having a shield and totems of undying and a lot of heal potions, with that maybe you can survive from him.
If you survived and killed him congrats! But you will notice that he dropped a shard, this are called "trollge shards" they don't have use for now.

The 1.1 adds: 1 new entity, 1 new food and small changes to the original trollge

The Unfinished or in other words, "The Non-Complete Demon" is the Trollge in a form, but incomplete, as you can see in the image above he has 4 arms instead of 2, he has his eyes in his mouth, but that doesn't stop him for killing...

Unfinished was an attempt of trollge to become more powerful, but failing in the attemp, making his eyes go to his mouth and make him grow 2 more arms and bleeding forever in his eye holes.
As said before, Unfinished is 1 block taller than trollge, that makes him 6 blocks tall
He is a true danger, as said before he is a little bit more faster than the Trollge, but he has a disvantange, he makes a loud beeping noise of a cellphone interference, making him loudest that the normal trollge.
In the image above you can see how he looks in the day time.

How we can kill him?

The trollge in his unfinished form is now truly impossible to kill, with netherite armor kills you in 3 or 4 hits, and if you don't have armor now really is a one shot, the wither makes it a lot more harder, with milk you can get out the wither effect, but unless you have a lot of milk is gonna be useless, because the unfinished as said before is fast, so he can hit you easily and give you wither again, but if you managed to kill him, he will drop you the Trollge shard

The Oil In Water

The Oil in Water is a glass with oil and water, you can find it on the creative menu or you can craft it using the next recipe
Using a Trollge shard and a bucket of water in a bottle of glass you will get it, you will get the artifact that the Trollge used to be more powerful than any other thing.

What are the uses?

The oil in water has only 1 use (this can change in the future): Food, after you eat it you will get the next effects:
The Oil In Water is not made for humans, so that's why you are getting only bad effects.
In the image above you can see me drinking the Oil In Water and gaining the effects said before.

The Watcher or in other words the watcher demon, is the Trollge after a terrible incident, he is faster and stronger than the other 2 ones, but that makes it louder.

The watcher is a terrible incident made by the Trollge, that made him smaller but stronger and louder.
In the above we can see the watcher and how tall he is, he will break your armor fastest than the other 2, when he dies he drops a trollge shard:
How he looks on day time.