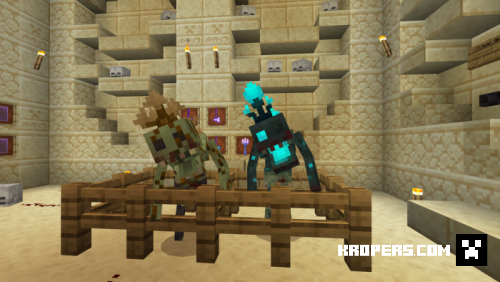 markus
15:22, 22 January 2022
110
0
The addon is a java mod that was ported to bedrock with the permission of the original author who is fish0016054, the addon adds a variety of mobs, items and blocks that we will see in each update of the addon.

Mycosis: mycosis a hostile mob, its behavior is a bit similar to the zombie, sometimes it can appear with weapons or another item, mycosis has a special ability to give you poison in a radius of 2 blocks so it is dangerous, it has a Bright blue mushroom variant, appears in the swamp and cave biome.
Frigid: The Frigid is a hostile mob that slows down when it hits you so you have to avoid it, if you activate the experimental mode the Frigid will appear with a weapon, it appears in frozen biomes.
Sludge Lord: The sludge lord is a hostile mob that will attack the player and the villager, it has several forms of attack, it is capable of summoning lil'sludge, it appears in the swamp biome.
Lil'Sludge: lil'sludge is a hostile and tame mob, it will only appear if it is summoned by the sludge lord or by the pestilence wand.

Undertaker: The undertaker is a mob that is generated by the world with probability of appearing, it has the ability to summon 4 unburieds which can appear with weapons, it can raid an entire village if there was no golem.
Unburied: The unburied is a mob that only appears if summoned by an Undertaker or the Midnight Morne.

Wand of Pestilence: The wand of pestilence is a staff that summons a lil sludge and is repaired 25% with silky sludge and its elaboration is the following.

Midnight Mourne: It is a melee weapon that deals 6 damage, is repaired for 25% with Undying Heart, and summons 4 unburieds.
Intestine: It is an object dropped by some mobs, if you open it, random objects will come out of it.
Frozen Dagger: A dagger that deals 6 damage and is crafted as follows.
Frozen Thigh: It is a melee weapon that does 8 damage and can be eaten.
Shattered Ice: It is an item that can be eaten and used in crafting

Cordy placed and Glow Shroom, dropped by mycosis, can be placed.