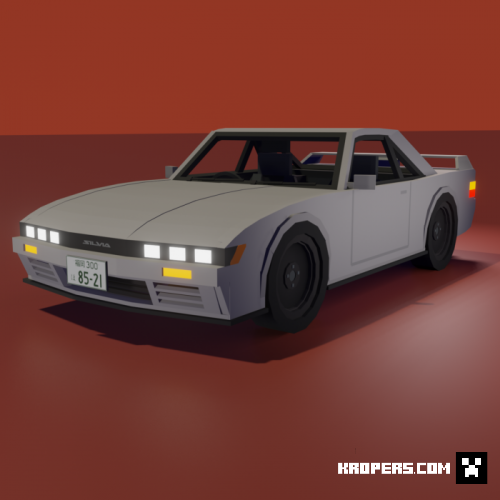 markus
20:23, 21 January 2022
94
0
Here it is, the specialty coupe that would later on serve as an icon for the drifting scene - and for many reasons. The nature of the S13’s perfectly balanced body/chassis made it easy to control and in this case allowed it’s driver to perform drifts with ease; on top of the fact that it made drivers felt more engaged to the road whilst driving. It was cheap too, making it all the more a popular choice of a vehicle especially among the youngsters of the time - affordable, fun to drive and had a flamboyant design. And even if drifting isn’t your cup of tea, there’s no reason not to enjoy it. As mentioned earlier its essentially a specialty coupe, meaning you could possibly daily drive it - making you without a doubt a million times cooler than 85% of the other drivers (their cars atleast) everytime you go out. Like tuning and fancy bodykits? The S13 has that covered as well. Due to how tough the CA18DET engines (for the 1988-1990 specs) and the SR20DET engines (1991+) were, they were able to withstand up to 300hp when tuned. As for bodykits, well, a Rocket Bunny kit exists, perfect for anyone who loves wide cars. With all that said, the S13 is essentially a perfect choice for almost all your personal needs whether it’d be for your own enjoyment or simply for a daily ride.

"The S13 Silvia coupe was made from 1988 to 1994, overlapping with the S14 Silvia introduced in 1993. The Nissan Silvia used fixed headlights; whereas, the 180SX, simply a hatchback version of the Silvia, introduced at the same time used pop-up headlights. The hatchback version, called the 180SX, replaced the Gazelle name in Japan and remained in production until 1998. The S13 was one of the first uses of Nissan's multi-link rear suspension, the technology of which was previewed in concept cars in previous years, such as the Nissan MID4. It also offered a four-wheel steering system for the first time, known as HICAS-II. In 1990, HICAS-II was updated and renamed SuperHICAS. The S13 also saw the introduction of a viscous-type limited slip differential for some models. In mid-1990, (for the 1991 model year) the SR20DE and SR20DET engines debuted, offering improvements across the board in power and torque due to increased displacement and a more efficient turbocharger than was offered on the previous cars." - Wikipedia

Has 2 variants, consisting of a total of 9 different colors and liveries.
A) Stock variant
Warm White
White-gray (Two-tone)
Super Red
Velvet Blue
Green-gray (Two-tone - Iketani’s S13)
B) Drift variant
Standard White
(You can make your own liveries using this version as a template.)
#5 Ashminggu Spec
(Homage to my previous Nissan S13 Drift car from my first Nissan Silvia S13 addon from around August 2020)

Engine bay
(Special thanks to Matt.#6138 for perfecting the piping of the engine and turbo).
Rear profile

I've made a video showing how it's done so if you don't understand words, you can check that video out. The car in the video used is my previous Datsun 240z addon which shouldn't be a problem as the concept (animations, door and hood mechanics and sound effects) are the same for this addon (Silvia S13).

Method 1: Get their spawn eggs from the Creative Inventory. They are classified as spawn eggs. You can search "Silvia" or "S13"  without the " for a more convenient way of getting them.”