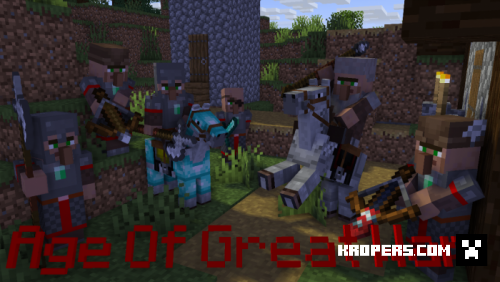 markus
14:50, 24 December 2021
271
0
Villager Soldier has experienced 3 important periods of war between both factions, Villager and Illager in the Minecraft world.  This period will open a new step for both sides. This addon will change the normal survival gameplay of minecraft.  It will be harder and more RPG and tactical.

Increasing war and tension between 2 factions in the Minecraft world. This great war is getting tougher and more dangerous. With that danger, both sides wanted to end the war with an overwhelming victory for the other side. Both are in an arms race to gain an advantage before the war. During this period, the villager faction has been helped by the player and has improved its army into an elite army instead of militia soldiers. A strong and unified army overpowered the illager's advantage. Faced with that situation, the illager faction invented a new weapon, the rocket booster. They have enhanced it with more destructive power and incendiary and fired from a crossbow (an improved version of its fireworks).

Details of this era:

This is a force of soldiers with rocket booster technology of the illager army. When the target is far away, he will fire rocket bullets at the enemy with the same explosion as creeper and burn the targets hit (which does not break the block).

Ice illager is an ice-type illager that summons ice cubes that fall from above with great explosive power. His self-defence attack is snow palm when there is a nearby target.
❤️ Health: 20.
? Movement speed: normal.
? Attack form: summon an ice cube from above to fall on the target to cause an explosion.
? Self-Defense Attack: Snow Palm.
❄️ Place of spawn: cold area with snow and ice.
⚒️ Dropped items: ice stick, ice heart.

Due to the failure of the campaigns, the player has improved the technology for the Villager faction to withstand the illager faction during these difficult times.

This is a mobile sword unit upgraded from Villager Sword. He wields a powerful enchanted diamond sword and durable health will make a good soldier on the battlefield. He will follow the player if the player gives him 1 emerald.

This is a crossbow-wielding warrior, can shoot through crossbows and recharges quite quickly. This is an elite ranged soldier who can shoot quite far and penetrate and is quite beefy. Especially when you give him fireworks, he will switch to rocket fire like the illager faction.

This is a special army upgraded from Villager Soldier, Cattle, mobility, high damage are the advantages of this special army. With the new weapon he will be able to fight with 2 different stances of stabbing and slashing (only stabbing and always slashing).

This is a light cavalry with weak armor and low damage. Appears only in the village and cannot give villagers cavalry service. Cavalry will appear naturally in the village, as long as it is a village, there will be cavalry. Cavalry can be tamed with emeralds.

This is a heavy cavalry equipped with heavy armor and weapons with high survivability and great damage in combat. Heavy cavalry can hit the ravager level.

This is the new technology of the villager faction. It will be a powerful assistant in the goalkeeping. It has a slow rate of fire but high damage and shoots through multiple enemies if they stand in a line.

This is a giant crossbow that only villagers can use. A giant crossbow has the ability to shoot far and high damage. The crossbow can pierce many targets.
❤️ Health: 80.
? Movement speed: slow.
? Attack: giant arrow with 40 to 60 damage.
? Range: 100.

Item update up to Villager with heavy crossbow:

This is a 2 barrel cannon, created by the player. Has the ability to fire 2 fireworks continuously but cannot move.

This is a horse-drawn carriage, capable of carrying both the player and the villagers.

?Item need for up to:

This is an ice weapon, when hit will slow down the opponent, Can summon falling ice like ice illager.

This is a medium damage heavy weapon for Villager. Players can use.

This is the tool used to summon the villagersoldier. Only 5 sets 1 stack and 1 summon 3 minions. Villagersoldier when summoned can be tamed and not traded to the player. Can only be purchased in the Villagersoldier exchange board.

These are loot boxes that will randomize any item (with a limit) these loot boxes will replace some chests in old buildings (if playing old maps of places where the world has loaded and buildings will not be replaced, yes. until the world has not loaded, it will change) there are 2 types of boxes: normal boxes and genuine boxes, normal boxes will beat a bit faster than genuine boxes. You won't be able to tell by looking. Creations obtained by command do not appear in the creative inventory.

Video of a raid in Version 4: