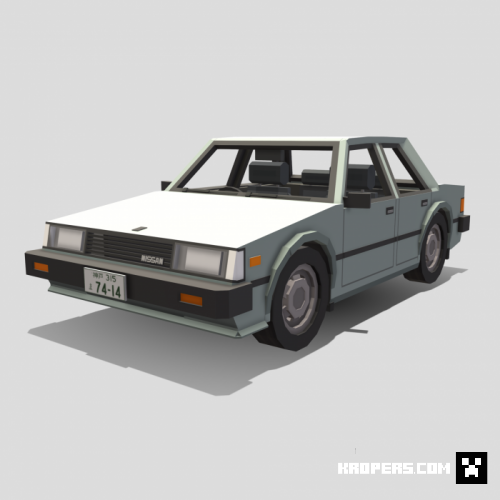 markus
20:41, 23 December 2021
275
0
Lets go back to a time where commuter cars were actually interesting, specifically, a time when they didn’t look like soap bars with wheels. Of course we are talking about the golden age of the automotive industry that is the 1980s. And for this project, the Nissan Sunny/Sentra 130y/ B11. Looks aside, this shitbox was pretty much everyone’s ideal commuter car back in the day. Economical as hell and is sure damned reliable - not to mention actually fast. So much so that people still use this car even to this day in certain countries where the 130y/ B11 was sold (as a Malaysian, I can confirm this). Essentially, if you’re someone who wants a simple daily ride that will save you a great amount of money for fuel, but absolutely despise the design of modern day commuter cars, the Nissan Sunny 130y is definitely a car for you.

"Introduced in late 1981 (at the Tokyo Motor Show), the B11s were the first front-wheel-drive Sunnys, predating by a year and a half the switch to front-wheel drive by their main Toyota Corolla rival, and were exported to the United States as the Nissan Sentra from the 1982 model year onwards. European sales began in May 1982, with this version of the Sunny going on sale at a time when front-wheel drive was quickly becoming the most popular layout on [...]" - Wikipedia

Has 2 variants, consisting of 6 color options and 1 special variant.
Metallic Blue
Metallic Red
White
Black
Gray
Gold
NRV-II Concept
(Has modern infotainment technology accessories/devices such as a digital navigational system or GPS, automatic wiper system which turns the wipers on when detects rain, driver assistance systems and much more - which, for the 1980’s was considered futuristic and ahead of it’s time.)

I've made a video showing how it's done so if you don't understand words, you can check that video out. The car in the video used is my previous Datsun 240z addon which shouldn't be a problem as the concept (animations, door and hood mechanics and sound effects) are the same for this addon (Sunny 130Y).

Method 1: Get their spawn eggs from the Creative Inventory. They are classified as spawn eggs. You can search "Sunny" or “130Y”  without the " for a more convenient way of getting them.”