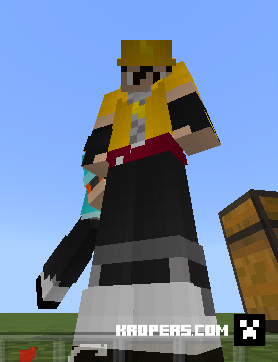 markus
20:06, 23 December 2021
148
0
This add on is inspired by the boboicraft/boboiboy add on, I purposely separated this add on because Minecraft can get errors, now you can be any element (boboiboy version), in this add on there are only boboiboy elements up to 7 and stage 2

In this add on, there are also boboiboy element mobs as your helpers using their own elemental powers

BoBoiBoy Wind, also known as BoBoiBoy Angin, is one of the original three elemental forms that BoBoiBoy obtained, the others being BoBoiBoy Lightning and BoBoiBoy Earth
BoBoiBoy Wind accidentally got some fake milk with Chemical X which was made by Adu Du to use in making Yaya's biscuit, and become boboiboy cyclone

BoBoiBoy Earth, also known as BoBoiBoy Tanah, is one of the original three elemental forms that BoBoiBoy obtained, the others being BoBoiBoy Lightning and BoBoiBoy Wind.

BoBoiBoy Leaf, also known as BoBoiBoy Daun, is a BoBoiBoy's new elemental forms.
When Ochobot was destroyed and gave BoBoiBoy the last of his powers, BoBoiBoy Thorn, along with all the other forms in a blind rage

Fire makes his first appearance, where he is first spotted as the suspected arsonist that was going around setting fires to random places by Adu Du and Probe
BoBoiBoy evolved after he felt very angry because of an incident where Bora Ra smashed Ochobot to pieces with his Black Hole Power

BoBoiBoy Water is shown wearing long-sleeved black shirt with cyan blue vest. He also wear the black trousers and a pair of black, icy cyan blue, and white shoes
BoBoiBoy first evolves Water into Ice after witnessing Ochobot's death at the hands of Bora Ra. With this newfound power, BoBoiBoy uses Ice alongside the other evolved elements to defeat Bora Ra.

this is boboiboy clock, if you want to turn into any boboiboy element, hold it and choose

you can tame him using iron nugget