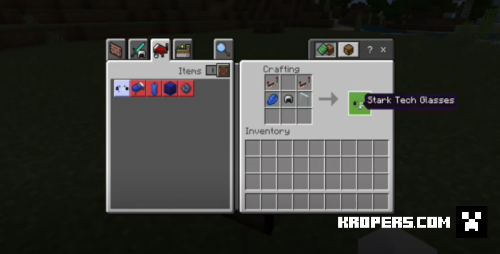 markus
18:14, 22 December 2021
508
0
I am Iron Man! In the Marvel Cinematic Universe, Tony Stark has made exactly 51 Iron Man suits, at least that have been shown on screen or in other references.This Addon attempts to add all 51 from the MK 1 to the MK 85 (yes the math might seem strange but supposedly the MK 51-84 were just software updates, so 51 total suits on screen)...

Here is a video showing everything in action!
To become Iron Man you first need "Stark Tech Glasses". You can right click them to enable the headset or disable the headset. If you turn invisible, just right click a few more times and it should resolve itself!
If you sneak, it lets you swap between the different suits which is shown in the first person hud. Sprint is used to activate abilities and suit up. When you are suited up your hud will change letting you swap between abilities instead of suits!
Some abilities are locked depending on the suit you have, like only the MK 50 and 85 can use the Nanotech Shield.
Each suit has a suit up animation. A lot of them are shared, for example this is the MK 2 which has an animation shared with the MK 3, 4, and 6 while the MK 5 (suit case suit) has a different animation.
It uses education edition abilities to enable "mayfly" letting you fly in survival. Flying has a special animation, and if you sprint while flying the animation will change as well!

Should work for the latest version of Bedrock or later, so 1.17X etc. In order for things to work you need to enable the Education Edition slider since the ability command is used to control the flight system.