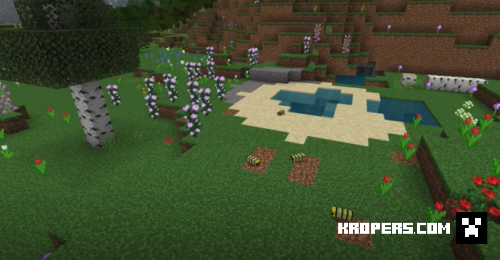 markus
19:49, 21 December 2021
166
0
It's called "the Life Update" because one of the goals of this addon is to add more life to Minecraft... and "the Wild Update" was taken...Another goal of this pack is to add in all of the mobs that have lost the vote in the last few years, including the ones from this years mob vote!

Here is the video showing all of these mobs in action!
The plan for this addon is to hopefully add some more mobs here/there in the future as well as make any needed adjustments or changes, but that depends on how things go.

Below is a small description of each mob, what they do, etc.
Caterpillars, Cocoons, and Butterflies!: These mobs are mostly for ambience. I considered making them "XP Farms" that generate XP when they go near certain flowers but it seemed a bit unbalanced. Caterpillars will eat grass and leaves and they will try to climb trees as well. You can feed them grass (not the block) to increase growth. They will turn into Cocoons and then Butterflies of different color. The Blue ones glow!

The Moobloom... there isn't too much to say about this one. You can Milk the Moobloom for Buttercup milk which clears effects and gives you some absorption, or shear them for Buttercups which can be fed to Bees to prevent them from, or turn them into, passive mode. Using a lead with a Moobloom will also cause nearby Bees to follow like a Llama Caravan.
The Iceologer is actually pretty simplistic. It attacks with ice, gives slowness when you get too close, and drops ice!
Mob A, AKA "Barnacle" will attack with its spear tongue. Originally I wanted to add some "temperature variants", but never got around to it (or maybe type variants like a pink river form). The Tongue Spear doesn't actually drown mobs but if I ever work on it again it might be something I try to add in!

Ant's and Anthills unfortunately don't spawn naturally due to some errors. You can still use spawn eggs or the summon command to find them though! The original idea was to have Ant's collect items, bring them to an Anthill, and then craft them into a certain item with each Anthill having a random "learned recipe" on spawn. It "works" but can be buggy at times and was causing some issues on testing so the whole Ant concept might need to be turned into something else in the future if this is worked on further.
Lions are basically just big cats, in fact their model was based on a reference of the cat model! This is also the first mob with gender variants, there is the Lion and the Lioness. Lioness' can't breed with other Lioness' they can only breed with Lions which makes them different from other mobs like Cows, Sheep, etc that can be bred with anything. They also have 2 different attacks. Lioness' slowly crawl before lunging forward at its prey and Lions jump at their prey. They also have an albino variant that can spawn very rarely!
Mob C, AKA "The Great Hunger". It doesn't have an official name yet so might have to come up with something! This mob is kind of like a moving farm. After some time it will become a "trapdoor". Mobs that fall into or walk over its mouth will be snatched up! After some time it will regurgitate any of the drops.
The Glare! A bit different from its original appearance, the Glare has glow berries that appear on its body relevant to the light level for example, in this picture here there are 11 berries so it has a light level of 11.
Mob D, AKA "Wildfire" is almost like an Alpha Blaze. They spawn around naturally and have a special spinning shield at a distance that protects it from arrows. It also drops a "Blaze Shield" which can be crafted into 4 Blaze Rods.
Finally there is the Copper Golem! They spawn in when lightning strikes a Lightning Rod on a Carved Pumpkin. They decay over time but decay can be prevented by right clicking with honeycomb or reverted with lightning. They also like to press buttons!

Should work in the latest version of Bedrock or later so 1.17X etc. No special setup required, all of these mobs, except for the Ant, will spawn naturally though some are biome dependant.