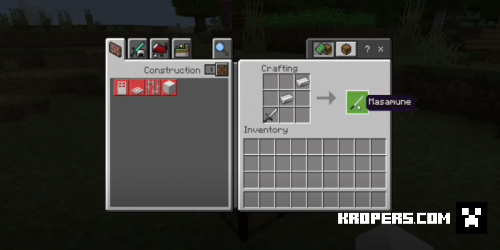 markus
19:41, 21 December 2021
97
0
I'm waiting cloud... I have come to bring despair to Minecraft! - Cubic Sephiroth. Sephiroth is a character from the final fantasy series but was also added to Super Smash Bros Ultimate, this Addon lets you become Sephiroth based on his Smash Bros appearance so his attacks are based around that moveset.

Here is the video explaining/showing everything. The thumbnail may look like clickbait but yes, you can in fact slice the Ender Dragon in half...
To become Sephiroth you must craft his special sword which is a right click item letting you turn into Sephiroth or turn back to normal.
Sephiroth is quite taller than a regular ol Steve. You can sneak to swap between different abilities and right click the ability item to use said ability, for example, in the images below, you have slash, flare, and shadow flare, but there are some more abilities highlighted in the video!
It also features Sephiroth's final smash ability from Smash Ultimate, and an ability in the actual game, Supernova which gives random effects. It can even turn certain mobs into frogs!

The frog model is based on the ones revealed at Minecraft Live but green! Using the slash ability doesn't currently damage mobs, but it can be used to slash creepers in half and if you get close enough... the Ender Dragon!

Should work for any of the latest Bedrock versions, 1.17X