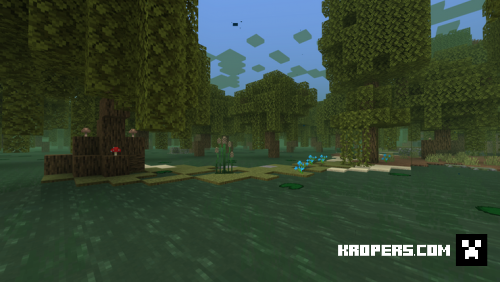 markus
19:37, 20 December 2021
199
0
Want new biomes to explore in your Minecraft world? Expansive Biomes adds 20+ new biomes to the game for you to seek out and explore, with more being added in the future!

Biomes will sometimes have the wrong fog and climate.
Custom leaves do not decay.
Custom Logs aren't mined faster with vanilla axes.
Custom Ores aren't mined faster with vanilla pickaxes.
Custom pickaxe can't mine some blocks.
You can jump over custom fences.
Custom fences give off a shadow.
Cattails may spawn on wrong blocks and spawn with vines on them.
Due to a 1.17.30 bug, the addon may cause game crashes.
Some enchantments don't work on custom items and armor (example - Efficiency).
Wider custom trees will sometime hang over the side of the terrain.

The Bog
Humid, wet, swampy biome consisting of water patches in the grass, patches of mud, large shallow bodies of water with trees, and mossy boulders. Frogs and Crocodiles will spawn here.

Volcanic Plains (rare)
Hot, plain biome consisting of erupting lava geysers, and basalt pillars with the surface being made of stone, basalt, and smoldering stone. (Geysers can take up to 20 minutes to erupt after being loaded.)

Black Sand Shores
Shore biome with black sand making up the surface, currently only spawns with the volcanic biome.

Marsh
Flat wet biome with a broken surface of grass, water, and mud.

Alps
Giant cold mountain biome with snow, and a flat surface on top.

Canyon
Large plateau biome with steep cliffs and flat valleys consisting of small pine trees, and occasional pillars with the surface being made up of hardened dirt and grass.

Autumn Forest
Forest biome filled with oak, birch, and pine trees with autumn colored leaves, and leaf piles. The Haunted Forest sub-biome has a rare chance to spawn within, or beside the biome.

Maple Woods
Forest biome with tons of maple, and spruce trees. Rare chance to find syrup in a tree.

Scorched Forest (Rare)
Forest biome scorched by heat from lava from the Volcanic biome. Will only spawn as a sub-biome in Volcanic biomes.

Mystic Forest
Mystical forest with a canopy of huge oak trees, Goblins and Fireflies can be found here. Lots of hostile mobs will spawn here due to the lack of light due to the trees.

More biomes will be added in future updates!


(Most blocks included in the addon)

Mossy Skeleton & Zombie
Currently just reskinned skeletons and zombies that spawn in the Bog biome.
Trapper Pillager
Neutral towards players unless angered. You can trade with them for pelts, leather, and hide, but their trades will not replenish. They will attack villagers, iron golems, and bears on sight. Skilled archers that can shoot 2 arrows at once in a short amount of time and have 45 points of health. Can be found in Hunter Cabin structures.
Vibranium Skeleton
Large tough Skeleton made of Vibranium, has 100 points of health, and will carry either an iron sword or a bow, with a rare chance to spawn with Vibranium gear.
Crocodile
Spawns primarily in water, where it is fastest, and will attack most mobs. Drops Crocodile meat when killed.
Frog
Passive animal that spawns in wetland biomes, it will hop around... that's about it. Drops Frog Legs when killed.
Black Bear
Neutral mob that will run from players, will only attack if hit or a bear cub is near. Spawns in Pine Forest biomes. Drops Black Bear Pelt when killed.
Grizzly Bear
Aggressive mob that will attack players, pillagers, and monsters (excluding creepers). Spawns in Pine Forest biomes. Drops Grizzly Bear Pelt when killed.
Moobloom
Acts the same as a normal cow, but is yellow, and covered with Buttercup flowers. Spawns in Dandelion Forest biomes.
Goblin
Neutral mob that will attack monsters (excluding creepers). Will attack players if angered. Spawns in Mystic Forest biomes. Can be traded with.
Fireflies
Small passive mobs that will fly around randomly. Spawns at night in Mystic Forest biomes. Can be caught with a glass jar.
Raccoons
Adorable neutral mobs that will attack players if angered. They will avoid players, and are nocturnal and will sleep during the day similar to foxes. They will eat crops, and pickup most food items and eat them. They are afraid of carved pumpkins, so they are a good way to prevent raccoons from eating crops. To tame raccoons, sneak and feed them bread.
Deer
Passive mobs that will avoid players, villagers, and pillagers. They will drop venison, deer antlers, leather and a rare chance to drop a deer trophy when killed.
Yeti
Aggressive mob that does 7 hearts of damage per hit, will attack most mobs on sight, and will throw balls of packed ice that deal 3 and 1/2 hearts when their target gets too far away. Spawns rarely in any Frozen biome, but spawns more commonly in the Frost Forest biome.

Grizzly Pelt Armor - Made from Grizzly Bear Pelts, and iron armor, it is a little stronger in protection, and durability than iron, and has a working cloak! (Remove cape from player to avoid them from glitching through each other.)
Vibranium Armor - Made from vibranium ingots, and is stronger than Netherite, more knockback resistance, and has slightly better durability. Some parts will glow in the dark, unless enchanted.