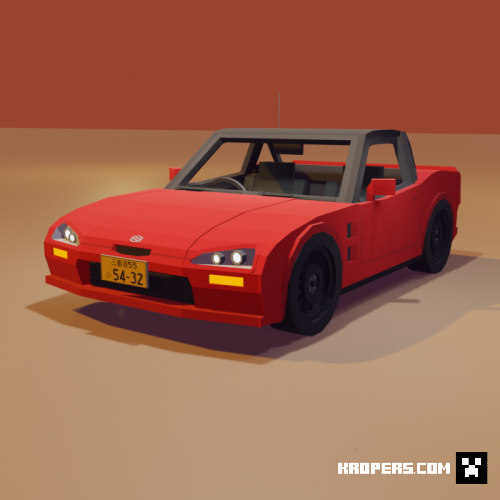 markus
23:28, 18 December 2021
108
0
The car that started the Kei-car trend in Japan in the 90’s. The Cappuccino was a car produced by Suzuki in a campaign to reintroduce Suzuki as a sports car manufacturer in the ranks of other Japanese manufacturers such as Toyota, Nissan and many others. While the campaign wasn’t as successful as one would hope, the Cappuccino was still without a doubt a success, so much so that it would later join the ranks of  2 other legendary Kei-cars that would come, the Honda Beat and the Autozam AZ-1. Fast, lightweight, fun to ride; easy to handle and would save you money on taxes and insurances, whats there not to love?

"The Suzuki Cappuccino is a small 2-door, 2-seater detachable hardtop sports car produced by Suzuki.The vehicle was designed to meet Kei car specifications for lower tax and insurance in Japan. Weighing 725 kg (1,598 lb), the Cappuccino is powered by a turbocharged, three-cylinder, 657 cc DOHC engine (just under the 660 cc maximum displacement allowed for a Kei car). Its dimensions also conformed to Kei car regulations on length and width, being 3,295 mm (129.7 in) long and 1,395 mm (54.92 in) wide. Front-rear weight distribution is claimed to be 50/50% when both [...]" - Wikipedia

To OPEN the doors, right click the car and the doors will open. Right click again to get in.
To CLOSE the doors, right click WHILE shifting/crouching.
I've made a video showing how it's done so if you don't understand words, you can check that video out. The car used in the vid is the Integra DC2 I made a while back, but that shouldn't be a problem as the concept of opening and closing the doors is the same as this car (Suzuki Cappuccino)

Method 1: Get their spawn eggs from the Creative Inventory. They are classified as spawn eggs. You can search "Suzuki" or "Cappuccino"  without the " for a more convenient way of getting them.”