Kropers » Addons for Minecraft PE » Night Of The Clown (Horror)

Night Of The Clown (Horror) 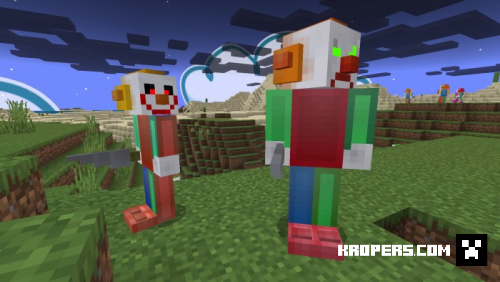 The darkest Minecraft night, the night of the new moon, is now the Night of the Clown.
On the night of the new moon:
...the clowns will (probably) appear. You'll know they're close when you hear crazy laughter. Best advice is to get inside, get to bed, try not to dream. For the more adventurous, get ready for a night like no other. Clowns will gradually start to drop from the sky, and they'll be on you, fast.
Can you survive?

You can shoot the clowns if you like, but some of them have a very special power that will teleport you to their location, if they get hit.
The clowns drop all sorts of dye, and rarely, an awesome netherite item.
They like chasing players the best, but they're not fussy, they'll attack most mobs.
Once the night is over, the clowns will start to despawn.
This is survival-friendly. You can add it to your world and nothing changes, except on 'Clown Night'; which you can skip if you're not ready - simply by sleeping.
Pro tip (maybe a sort of cheat, you can decide); the voodoo doll from our Hurt Me Plenty addon has been known to keep back some of these dreaded clowns.