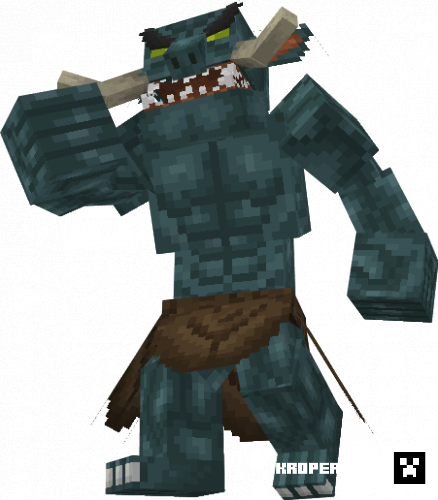 markus
19:13, 13 December 2021
175
0
This addon adds mythological creatures that added a little more variety to minecraft bedrock, these creatures appear in any biome.
You can also tame some creatures like the ice drake.

The cockatrice appears in all biomes. (only at night),
The Drake appears in the Iceberg biomes
The cerberus appears naturally in the nether (many are spawned, it will be corrected in the next update)
The pixie in the woods (only during the day)
The wendigo in the forest (only at night)
The troll appears in caves all over the world.
The minotaur appears for the moment in the desert.
The yeti appears in frozen places just like the ice drake.

The troll is a Mob (creature) that is found in caves, these creatures have a brutal strength as well as they have a high life, when you hurt the troll, from time to time it will release its troll meat with which you can consume and have night vision and strength 3.
The troll at the moment of seeing a flash of light, will become a stone statue, that stone statue can be broken using any pick (Wood, Stone, Iron, Gold, Diamond, Netherite).

The Drake does not have many uses in the beta at the moment, so when it dies, it does not drop anything. The Drake can be tamed with any raw meat, when the drake is left unconscious on the ground, it should be noted that if you take too long to tame the drake, it will die.
The Drake appears in snowy biomes and appears more frequently in parts of the Iceberg

(The mount can be placed on it but you don’t have to be sitting on it, just leave it tight with the mount in hand and it will be placed).

Seahorses are found throughout the oceans throughout Minecraft. It can also be tamed with Seaweed, the mount used is a normal Minecraft
By killing the hippocampus, it will release its scales with which you can make a potion of aquatic respiration, you only need 3 flasks of bottles with water, a nether wart and flame dust (blaze dust).
Diving System:
To deactivate, just press the jump button once, once that is done, you can look up without going up or down from the water, to reactivate the hippocampal diving, you just have to press the jump button again, once that is done you can look up and rise to the surface or dive into the depths.

The cockatrice appears in all biomes and places in the world as a hen, cockatrix love to play with their prey and kill them slowly, mostly they kill their prey in a herd. Do not eat their meat raw because it may make you hungrier, cook the meat of the cockatriz and eat it.

The wendigo appears at night in the woods, there is a possibility that the wendigo will summon clones of itself and attack you.
When killing the wendigo, it will release its head to have it as an ornament in your equipment, it will also release its claws with the power to summon small wendigos, they work more as a trap.

The cerberus appears in the nether, when you kill the cerberus it will release its head, when you put it on all the creatures of the nether will flee from you, since you have the head of the cerberus in your head, since the cerberus is the guardian of hell .
He will also drop the sword of Hades which has 9 damage and fiery aspect.

It is planned to appear in some type of dungeon like a labyrinth as well as in mythology, the minotaur has 4 attacks,the minotaur is very strong and has a lot of life it will be a real challenge to kill him.
When killing the minotaur, he will release his legendary ax, at the moment it has no use and having it in hand will slow you down.
(You can also cut wooden things because it is literally an ax xd)

The yeti is one of the Creatures of this addon that are not finished yet, in the future bugs will be fixed and sound will be put on it.

With the forge you can create various tools and ingots, at the moment it does not have many crafts.

The ice drake armor takes away your slowness, and when walking through the water it will turn to ice, these functions only apply if you have the full armor equipped.
(You can also remove the slowness that the minotaur's ax gives you)