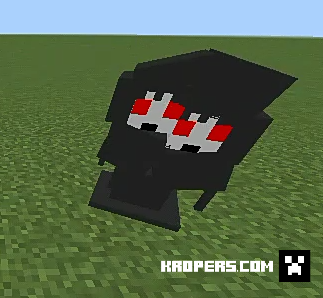 markus
18:26, 11 December 2021
171
0
Are you a fan of Shinbi House cartoon? Well this time the add on is there, don't you know what shinbi house is?Shinbi House is a cartoon originating from Korea with the horror genre, telling about a creature in Shinbi's apartment, and there is a child who can defeat the creature, namely Hari Koo, Doori Koo, and Kanglim, thanks to their help, namely the Goblin creature or his name, Shinbi.

in this add on there are only humans and creatures, but the power of their creatures is great, as shown below

his ability spawns water every time he walks, and he can shoot water at his target

he is a faceless creature, his ability can teleport anywhere, maybe in the next update he will be able to disguise himself, please wait for this add on!

that ability can bind a person, and is poisonous, and he can attack about 2 blocks away to use his hair

he is a creature who likes to steal human bodies, but his ability only attacks, I will add his abilities later, please wait for the next add on

he is a good goblin creature, he likes to help harik when fighting creatures, but in this add on he still doesn't have the ability, please wait for the next add on!
2.human

Gaeun is Hari's best friend, his abilities don't exist, but he can help defeat creatures too

hyun woo is a friend of hari, his ability only helps add to the problem every time there is a creature, just kidding

kang lim is hari best friend too, but hari likes him because he is handsome, and his ability is he can fight creatures using a sword and magic creature paper, but in this add on he can only throw magic creatures paper, wait for the next add on