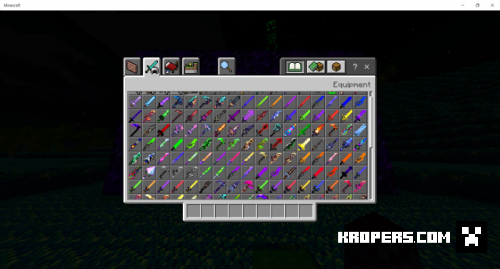 markus
18:01, 11 December 2021
236
0
An addon that has features so random but somehow are all linked together, there is over 2000 new features inside this one addon, prepare to never see minecraft the same again.

This addon adds so much content such as new swords, tools, magic items, guns, mobs, bosses, blocks and recipes and a lot have cool functionalities such as lightning, teleportation, extreme power boosts and manipulation of monsters near you. for example, the music disc player, it plays a random music disc to every player in your entire world or the staff of black hole manipulation and it sucks up mobs and does 800 damage to them before dropping them back down again. anyways enjoy these screenshots of some features.
New Weapons.
New blocks (Not including ores, dragon eggs and generators).
Magic Staffs.
New Materials.
Armor and Guns
Biomes, The Asteroid Residues, The Xeno Wasteland and The Supercomposted Trees
The end but BETTER
The Astral Lands (spawns at Y 200 and higher in The End dimension)
New Crafting tables with their own recipes
Draedon's Dungeon
and over 300 different recipes for the new modded items and existing items and a large number of features are dropped by the new modded mobs and blocks. watch the trailer for more spoilers for the addon
VERSION 1.1 Halloween update
Added new biome the Acidic Seas
pumpkin armor (dropped by Halloween spirit)  as well as glowing glass and scrap pipe
VERSION 1.2 Holy and midnight update
added new blocks, armor, materials, magic staffs, armor and mobs
VERSION 2.0 Chaos brews update
Added diamond, gold, emerald, redstone, amethyst, copper, xenomite, iron and lapis
Added the Abandoned Lab (spawns in the Xeno wasteland underground)
Added the Last attempt structure (spawns in the astral lands) (has the NEW FINAL BOSS spawn egg inside)
New nether biome, The charred corruption, (randomly spawns a new boss, The 3 Headed Ghast)
New End Subbiome, The Voided Fields
The lost enchantments (structure) (soawns 60 blocks underground)
For more information on Version 2.0 watch this video
VERSION 2.1 Early Fallen Update
Added New Biome, The Fall Forest
Added New tools, weapons, ores, and armor
Added Skulk items (Creative exclusive for now)
Version 2.2 The Crops and Fogs update
Added new blocks, tools, armor and foods
Added new subbiome, The true clouds (spawns at y230 in the overworld)

to use this addon apply both the behavior and resources into your world and enable ALL EXPERIMENTAL SETTINGS EXECPT CAVES AND CLIFFS, caves and cliffs breaks the addons biomes.
If the pack does not import change it into a .zip file and put them in either the behavior or resource packs folders depending on which/both didnt import