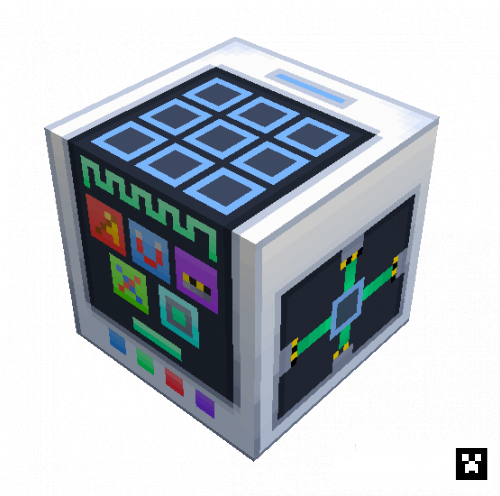 markus
20:28, 10 December 2021
136
0
Suinters Addon, or formerly called Golden Utilities, is a plugin that adds new utilities and objects to the game.  In this version we have reinvented the complement, giving a new focus and meaning to the objects found in it, focusing on adding technological objects such as mob transport, DNA collection, protection, among others, which will be useful in your survival .

It is a block which eliminates all monster-type mobs within a radius of 25 blocks.  When placing it, it will be off and to turn it on or off you must hit the block.
Elevator

It allows you to teleport from one floor to another easily and simply, just place the elevator where you want and place another or others in the same x, z coordinates, that is, in the same place where I placed the first one, either above or below it.
To go up to the next elevator just jump on top of the block and to go down hit the block in one of its corners, not in the middle as it will not work.
DNA collector
It is used to obtain the DNA of the mobs of the type animal of the Minecraft Vanilla.To do this you must approach a mob with the item in hand and press the "Collect" button and it will immediately drop the mob's DNA.
DNA flask
Serves to store the DNA of an item from a mob through the DNA extractor.
Fossils
They are fossil remains of mobs, which can be found in the fossil blocks, and which can then be used to obtain the DNA of their respective mobs in the DNA extractor.
Block of fossil

It is a block that when you break it you will be able to obtain the fossil of a mob or other objects such as bones, gold nuggets or even diamonds, each object has a different probability of being dropped.  Currently this block can only be obtained by trading with the Investigators, who will always offer them to us.  In a future update they will be generated naturally in the world
Investigators
The investigators will be generated naturally in the world, and with whom you can trade the fossil block,some fossils and DNA of some mobs, each of which spawns with a different type of exchange.
DNA Extractor
It is a table with which you can extract DNA from fossils or mob drops, such as honey from bees, chicken feathers or cow leather, etc.  (All the items from which DNA can be extracted are in survival mode within this table).  To extract the DNA, simply place the item or the fossil of a mob in the middle and next to it place a DNA flask.
SpawnEggs machine
Through it you will be able to exchange the DNA that you have collected or extracted together with an egg to obtain the spawn egg of its respective mob.


Magnet
It is an item that when having it in hand attracts the items that are lying in a radius of 25 blocks.
Mobs Magnet
It is an item which allows mobs to move mobs magnetically, being able to move them from one side to the other with their eyes.  To do this you must approach a mob and hold down the screen, and to release the mob you must change to another slot. (It works on mobs from other addons.)
Magnetic Chest
It is a chest which attracts the items thrown in a radius of 25 blocks, and stores them within its inventory.
To remove it you need to use a Remover

Note: It is necessary to remove the items from your inventory before removing the block as if the items are not removed they will be lost
Mobs attractor
It is an item that will allow us to move or remove a mob from one place to another, simply approach the mob you want to move and leave the screen pressed until the message that the mob has been linked appears, then with the item, hit the block where you want the mob to move. (Works with mobs from other addons)

Net
It is the most basic net that can be Crafted, with it you can catch any type of entity and entities other addons, however you can only have one mob trapped at a time.
Golden Net
It is a medium type net, and with which you can catch all the Animal-type mobs of Minecraft vanilla, and with which you can catch mobs infinitely.
Dark Net
It is the counterpart of the golden net, being able to catch all the monster-type mobs of Minecraft Vanilla infinitely.
Diamond Net
It is the best net you can craft, with it you can capture any type of mob and infinitely.
Net functions:
-To capture a mob in the case of basic nets and the diamond nets you must approach the mob and then leave the screen pressed, and in the case of the golden and diamond nets you must press the capture button or interact with the mob
-To release the mob you must hit the item on the ground where you want to release the wolves
-A message will be displayed in the chat when you capture a mob, which only you will be able to see, and in which the net where you captured the mob and the name of the mob you captured will be indicated
-When having the ney in hand, an action bar with the mobs that you have captured will be displayed on the screen
All mobs remain linked to the network where they were captured, so to have different groups of separate mobs there are 5 different networks, which retain the same characteristics of being able to catch mobs infinitely and only serve to separate mobs, in the In the case of the basic network, there are 10 different networks, which serve in the same way to capture only one mob.  To obtain these network variants, you must first craft the normal network of the type of network you want to craft, and then place it on the crafting or technology table and choose the network variant you want to craft, you can also place any network variant and change it to the network variant you want to obtain.
All the mobs captured in these networks retain all their characteristics, that is, their texture, name, inventory, domestication, etc.  And at the moment the mobs are captured they will not receive any type of damage, either by day in the case of zombies or due to lack of water in the case of fish.
Trap for mobs

As its name implies, it is a trap which is placed on the ground and will catch any mob that passes over it.  When placing it the trap will be closed and to open it you must hit the block, in the same way to close it, as it is closed it will not catch any mob and it will do so until it is open.  The mobs that the trap caught will be assigned to the player who is closest to the block.  To release the mobs captured with the trap, you just have to press and hold the trap item.

Like the nets, having the trap item in hand will show us an action bar with the capture mobs.
Mobs detector
It is an item which when having it in hand will indicate the mobs that are in a radius of 25 blocks.
Illiminator
It will allow us to place invisible light blocks which will iluminate the areas.
Stun Gun
Fires lazers which will slow down mobs that are hit, and inflict 1 life point.  Each pistol has 100 shots.
Most of the addon is compatible with other plugins, the only non-compatible items being: the magnet, the mob magnet, and the mob detector.  Therefore, the Player component will be available to add to other components.  Also, it is allowed to include it and create plugin packages with this addon.
The addon is available in 5 languages: Spanish, English, French, Portuguese and Russian.