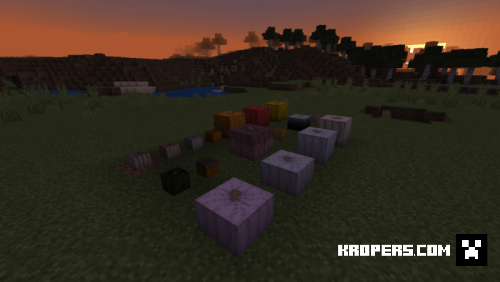 markus
19:47, 10 December 2021
94
0
This add-on adds many real pumpkins. And yes, they are all real pumpkins. From blue to green to even red and yellow. There is a lot more of pumpkin to choose from.

This adds a lot of different types of pumpkins and jack o lanterns. You can obtain these from an exotic trader with all the things such as cocoa beans and rare items. The exotic traders can be found in dark oak forest and swamps. To make carved pumpkins just put the pumpkin you want on a crafting table in the middle. Some pumpkins have special carvings. You make those within the pumpkin in a crafting grid. To make a jack o lantern put a torch to the right of the pumpkin and left if it is a special carve.
Here are all of the pumpkins
mixed,green and orange tiger striped pumpkins
Blue doll and porcelain doll pumpkins
Mellow yell pumpkin
Jasper pumpkin
Cucurbita maxium pumpkin
Baby boo and baby bear pumpkins