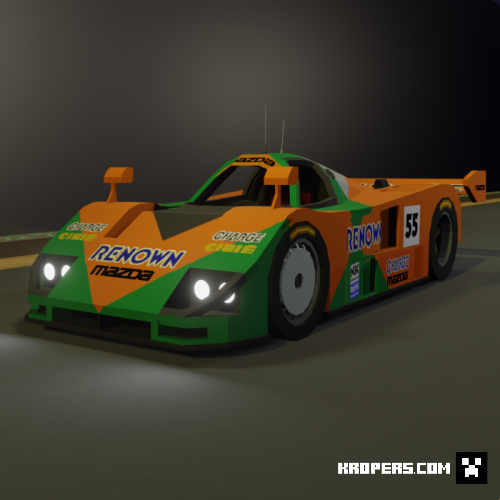 markus
19:43, 10 December 2021
95
0
Here it is. A machine that proved many things to the automotive world. The legendary machine that gave Mazda the title as the first ever Japanese manufacturer to win the prestigious 24 Hours of Le Mans. 7-8-7-B. Mated with Mazda’s R26B, a 4-rotor Rotary/Wankel engine, this absolute beast of a car managed to produce and upwards of 930hp. To handle this power the 787B’s chassis was made out of carbon composite, which not only ensured the rigidness of the machine, but also reduced the overall weight of the 787B to just over 830kg. With all that working in harmony, the 787B could attain a top speed of 353km/h. Then came 1991 Le Mans, a time where things were getting much more competitive with European manufacturers such as Peugeot, Jaguar, Mercedes and Porsche all giving their best shot to take the win. 362 laps later and the 787B takes the checkered flag without a single incident, proving to the world the true power and capability of the rotary engine as well as the capability of Japanese manufacturers to compete against European manufacturers.

Knowing that my next project would be my 100th submission here on MCPEDL (aka this project), I thought I’d do something special. The 787B! As stated above, this machine was in a league if its own. (First and only car mated with a rotary engine to win Le Mans, held the title of the only Japanese car to win Le Mans until 2018, an icon and staple in automotive history.)
I’d like to thank everyone for supporting me throughout my time here on MCPEDL ever since I started posting here back in May 2020, I’ve definitely gained alot of experience and knowledge from this 1 year and 5 month experience that I’d never had thought I’d gain if I never made addons, specifically automotive related addons.
This is also my first model to be modelled using a blueprint, which definitely helped in making the model look more accurate to the irl version.
I’d like to thank and credit Discord user Matt.#6138 for his time and effort in modelling and supplying me the 4-rotor rotary engine used in this model. The engine model supplied by him is without a doubt highly detailed and very accurate to the real model, which is something that definitely isn’t something easy to do and therefore Matt definitely deserves credit for that. Yet again, thanks Matt!
Hope ya’ll enjoy this very special project!

"The Mazda 787 and its derivative 787B are Group C sports prototype racing cars that were developed by Japanese automobile manufacturer Mazda for use in the World Sportscar Championship, All Japan Sports Prototype Championship, and the 24 Hours of Le Mans from 1990 to 1991. Designed to combine a mixture of the Fédération Internationale du Sport Automobile (FISA) Group C regulations with the International Motor Sports Association (IMSA) GTP regulations, the 787s were the last [...]" - Wikipedia

I've made a video showing how it's done so if you don't understand words, you can check that video out. The car in the video used is my previous Datsun 240z addon which shouldn't be a problem as the concept (animations, door and hood mechanics and sound effects) are the same for this addon (787B).

Method 1: Get their spawn eggs from the Creative Inventory. They are classified as spawn eggs. You can search "787B" or "Mazda"  without the " for a more convenient way of getting them.”