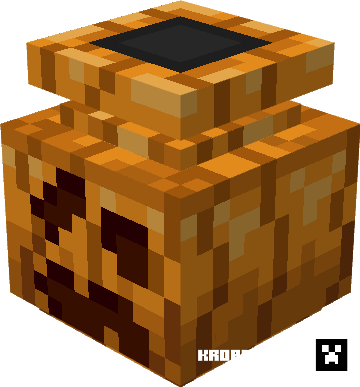 markus
21:03, 06 December 2021
106
0
The More So Less Snore is an ever-growing expansion to the game. It will be constantly updated to improve parts of the game where I (and my patrons) see fit. This add-on will add mobs, structures, items, weapons, armor, and so much more! This Phase Two of the Mysterious Forest. Not only that but now there is some spook in this little update...

Welcome to the More So Less Snore expansion add-on! This is an add-on that adds More to Minecraft So you Snore Less! Without further ado, let's get into the thick of it...

But before we get into the real stuff, let's talk about this event.

This update includes some Pumpkin Themed Items for your delight.

These items will only be obtainable in survival MSLS until Nov. 6. So get searching the dungeons of the overworld to get them!
Pumpkin Vase - The Pumpkin Vase is a pumpkin vase is a vase that can be lit for light and for some spook.
Pumpkin Battle Axe - The Pumpkin Battle Axe is the pumpkin equivalent of the Iron Battle Axe. It has more durability.
Pumpkin Staff - This is a pumpkin version of the Staff. It has twice the durability of the normal Staff.
Pumpkin Leader Helm - A pumpkin version of the Armesis Leader Helm. Quite pumped.
Pumpkin Ingot - An ingot used to repair all your LTO items!

Mobs. More So Less Snore has many mobs, ranging from useful to downright evil!

Let's start with the undead mobs first:
Broken Skeleton - Has chips and scrapes and is a lot weaker than its non-broken counterpart. It has 10 health and unstoppable rage!
Spawns in the same areas normal skeletons do.
Demon Skeleton - An angry Skeletal Version of the Demon, who has been missing for decades. It has 24 health. It can warp around and blind you.
Spawns on Demon Brick.
Dungeon Skeleton - A Skeleton commonly found protecting the new dungeons. It has 30 health. It also has a mace with your name on it!
Spawns in dungeons.
Dungeon Zombie - The zombie version of the Dungeon Skeleton, but with skin and a sword! Has 30 health. It also has a sword which if under lots of requests, I may add as an obtainable sword.
Spawns where Dungeon Skeletons spawn.
Skilled Skeleton - A skeleton with great skill as it can shoot you with arrows faster than you can say this sentence. Has 20 health. It also sports a familiar mask.
Spawns underground so you can die repeatedly.
Mystrodi Skeleton - A very Mysterious skeleton found in the Mysterious forest. Has 20 health. It also can spawn with bows or swords.
Spawns in the Mysterious Forest. Is also summoned by a Boss.
Obsidian Skeleton - This Demon skeleton has been forged in obsidian causing it to change its main goal from killing to protecting structures. Has 20 health. It can also inflict nausea on its target.
Spawns in Obsidian Structures.

Skeleton Vindicator - The skeleton version of The Vindicator. Equipped with a cursed axe, your demise is its only goal. Has 24 health.
Spawns in the Nether.
Cave Zombie - This gilded fellow loves to be in caves so much, it became cavey. Has 40 health. It is commonly used to get valuables quite easily.
Spawns underground.
Maylac Zombie - A Dungeon zombie taken by the H̴̬͔̰̠̳̞̮̝̼̣̠̱͚̔̇͑͌͑̔̆͐̾̐̌̅́̄̉̎̔̋͋̒̀̂͆̚̕̕͜͠ͅâ̶̜̠͚̣͚̻̭̱̜̦̲̬͓͔̯̫͈̲̺̰͚̏̈́͂̿͜͜͜p̵̨̝̩̫̺͕͉͔̻̹̺̜͖̩̬̬͔͙̙͎̰̟̰̼̮̌̈́̾͊̈́̈̅́́͊́̂̈́̅͘̕͜͝͝ṕ̶̢̨̢̨̖͎̩̯̜̙̱͍̥̤͔̝̦̠̒̌̐̇͗̎͒͗̐͝ͅy̶̧̰̤̝̻̞̥̺͖̲͈̮̟͓͕͋͂̈́͊̈́͛͒̀̀̈́͐̐̑̈́̅̾̈́̔̍̔͗̍͘̕̕̕͜͝͝ͅ ̴̜̱̯͕̱͓͉̼͇̭̻̘̳͚͎͙̞̥̟̼͔̣̗̠͎̍͆̀͐̉̄̈̒̅̀́̅̕̕͜͜͠C̵̮̙͌̄͐̏̊͗͊͋́̿̓̍̿͒͗̊̚͘̚̕͝ư̶͓͔̹̤͉̫̊̊͛̂̽̍̓̈̂̒͊̅͑͋͆͊͋̈̔̓̑͐̿̀̍̉͘̚͠ļ̵͖̥͖̦͎͇̳͙͚̺̲͎͉͇̼̥̞͂̎͒̍͂͆̀͌̎̽̀͂͗́̅̑̐̆̔́̇͘͝͝͠t̸͙̰͉̩̙̣͓͈̜̤͓̠̭̬̟̻̭̲̜̪̿̒̉̽̓͆͊̓ to be used for different purposes. Has 50 health. Inflicts Fatal poison on its target.
Spawns in Maylac Structures.
Zombie - Though it may not be a new mob to you, its functions are quite different. The Zombie is now hungry for the flesh of animals and will do anything to eat them. It can now infect your farm animals.
Banshee - A very phunky phantom with an annoying laugh. Has health of an unknown amount. Is a mini-boss.
Spawns in the Mysterious Forest, and in some vases.
Corruptor - A tall boy with immense rage. Has 170 health. Charges portals and explodes. Is angered by broken magma. Is a mini-boss.
Spawns in the Nether very rarely.
Crawler - This cute little thing may look bad but on the inside, it has a heart of gold. Has 30 health. Can be tamed with bones, basically the underground dog.
Spawns in caves.
Eel - Basically a fish.
Spawns in water.
Hell Cow - A denizen of the Nether. Has 15 health. Drops Beef somehow. Is breedable with rotten flesh.
Spawns in soul sand valleys.
Hell Flyer - This mob, a cousin of the phantom, has no care in the world. This mob will swoop in and attack anything. Has 20 health. Can morph through walls.
Spawns in the Nether.
Infy Zombie - Zombies can be infected with infy spores which cause them to be nothing but a catalyst for more infy growth. Has 20 health.
Spawns never. Can only be infected.
Jolier - Currently there is no way to find the Jolier. I just wanted to give a teaser...
Lost - Ghost-like mobs found in the Mysterious forest. No one knows how they came to be...
Spawns in the Mysterious Forest.
Morvindict - The Phunky Phantom. This menace spawns with a powerful ax and will slash even those who have devoted themselves to the undead lifestyle... Health of this beast is unknown.
Spawning is unknown.
Shop Skeleton - This friendly skeleton has given up his life of villainy, to a simple shop life. This is only after he regains his head though... Sells some exclusive items. Canonically has the best-looking pair of pants in the add-on.
Villager Miner - This miner can be rarely found underground. Sells Mining helmets.
Wandering Miner - The dead version of the Villager Miner. Has 100 health. Drops some nice stuff for spelunking.
Spawns rarely underground.
The Abomination - This is one of the only main bosses I want to show off here. This Boss has 200 health. It has 3 attack cycles and is very powerful. Killing this boss drops some of the most overpowered items in the add-on.
Only can be summoned.
Sentry - This is the second boss I wanted to show off. It spawns in towers in the next patch. Drops a sentry heart when killed.

Now that we have gotten the mobs out of the way, this part of the description will be dedicated to Events and Functions. Some of these events are small and others are big.

Zyler Scout Drop Pod Event - Starting, we have the Zyler Scout Drop Pod Event. Very rarely, a drop pod will drop from the atmosphere. This will allow the use of a very powerful workbench if used right.
Natural Tree Event - After playing a while, you will notice random tree saplings emerge in your forests. This is the Natural Tree event. This will help give the feel of a living forest.
Team Undead Function - After Consuming suspicious flesh dropped from the Abomination you will become undead. Most enemies will no longer target you and you will be hated by golems and villagers. You can kill villagers and obtain Blood Emeralds which can be used for future update magical items. The negative effects of being undead of course are burning in daylight and being weak in the day.

Now we are moving on to Items. More So Less Snore has quite a few items in it.

There is a ton of Randomly Generating Structures in More So Less Snore, but I do not want to spoil them, so I won't.

That concludes this long description of the More So Less Snore Add-on.

For Adfly, wait 5 seconds and skip