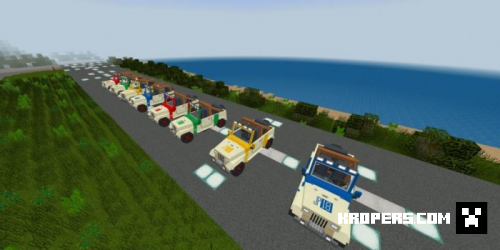 markus
20:45, 06 December 2021
121
0
• The latest add-on update now containing 10 Jurassic Park vehicles and other franchise movies below will have images and information about them. The addon now has new interactions in which you can paint some vehicles and refuel them using fuel.

• Below you can see some images showing the new vehicles, their new functions and interactions that were added in this update.

Jeep:
There are two types of jeep in this update both need to be refueled using the added fuel and both can be painted using green yellow blue and red

Motorcycle:
The motorcycle does not have the interaction of painting. But for its locomotion it needs to be fueled so it will need fuel to be able to move with it.

In this new update the gyrosphere does not need to be fueled because it is an electric vehicle, however it can be painted, thus having two variants, the paints that can be used are Blue for its standard color and Red for its variant color.

Ford Explorer:
The Ford Explorer in this update will act similarly to Minecraft's Minecart it will remain static on the tracks. A New Skin was also added So now he has two Skins. For you to paint the Ford Explorer it needs a specific paint, a paint bottle with mixed colors. The Ford Explorer, as it is an electric car, will not need to be refueled.

Helicopter Ingen:
The helicopter in this update has only the fueling interaction implemented. It currently has no other Skins.

QuadBike:
Quadbike was added in this update, it has the paint and fuel interactions since it is a fuel-powered vehicle. Its paint interaction makes it possible to paint it using just three colors Green, Red and Blue.

Military Hummer InGen:
This vehicle is a military vehicle used by InGen at Jurassic Park The Lost World. It has two types and both need to be supplied to be used. It has no paint interaction!!
4 player seating capacity.

Fleetwood RV Mobile Lab:
Mobile Lab added in this update has only the interaction of supplying it is possible the entry of only 4 players but already in its trailer it is possible the entry of only 1 player. The trailer to follow the truck requires the player to enter it /Win10 right click/, /Mobile devices click the interact button/ when mounted on the trailer so it will follow the truck when it moves.
4 player seating capacity /in truck!.
1 player seating capacity /in trailer!.

Fluid Extractor and Fluid Filter:
On the right we have the fluid extractor that will serve to craft the fuel, but it will need right after it is crafted, to be filtered for that we have the machine on the left which is the Fluid Filter.
Crafts:
Machines:
1º Fluid Extractor
2º Fluid Filter
Itens Fuel:
1º Unfiltered Fuel
2º Filtered Fuel
With just one bucket of fuel being used in a vehicle, you are guaranteed 10 minutes of a full tank to ride the vehicle!! /this is for all fuel-powered vehicles/...