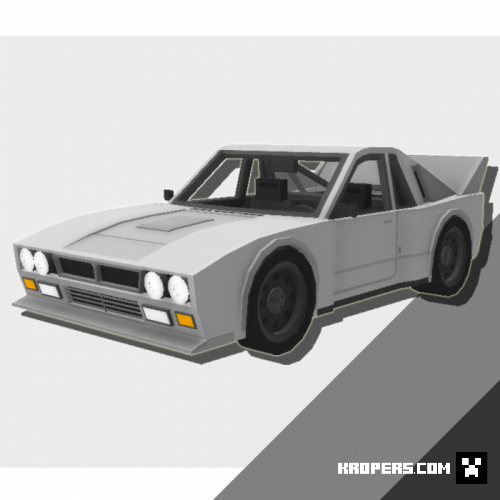 markus
19:11, 04 December 2021
32
0
What happens when engineers are no longer restricted or limited to innovate and develop a racecar? This became a reality in 1982 following the introduction of the infamous Group B WRC. And what comes next is the birth of some of the fastest and most spectacular racing machines to ever grace Earth. In this case, the legendary Lancia 037, a mid-engine sports car developed by the Italian rally pioneer car manufacturer, Lancia and designed by the one and only, Pininfarina. Aside it's rather interesting background of creators, this machine could generate up to 325hp with a claimed top speed of 260km/h. By today's standards it might not be very fast but this was the 80's, not to mention that it was build for rally. One wrong step and you'd be meeting Death only seconds after.Was it successful? Well, for a racecar that was limited to 2WD (RWD specifically) that had to compete in harsh environments and against it's 4WD competitors, hell yes. It manage to win the WRC Constructor's Championship of 1983, breaking Audi's (with their 4WD Audi Quattro) winning streak. And as mentioned above, this is a big deal considering it's an RWD.Fast, sturdy and a timeless design - the perfect car for those who want to challenge themselves navigating through the harsh environments of rally courses at high speeds, while looking good doing so.

"The Lancia Rally (Tipo 151, also known as the Lancia Rally 037, Lancia 037 or Lancia-Abarth #037 from its Abarth project code SE037) was a mid-engine sports car and rally car built by Lancia in the early 1980s to compete in the FIA Group B World Rally Championship. Driven by Markku Alén, Attilio Bettega, and Walter Röhrl, the car won Lancia the manufacturers' world championship in the 1983 season. It was the last rear-wheel drive car to win the WRC. In 1980 Lancia began the development of the 037 to comply with the then new FIA Group B regulations that allowed cars to race [...]" -Wikipedia

Has 2 variants and a total of 4 colors.
White - Stradale

Rear suspension
(The back tires in this picture are removed only as a preview to get a better look at the suspension system. The back tires are not actually removeable in-game.)

I've made a video showing how it's done so if you don't understand words, you can check that video out. The car in the video used is my previous Datsun 240z addon which shouldn't be a problem as the concept (animations, door and hood mechanics and sound effects) are the same for this addon (Lancia 037).