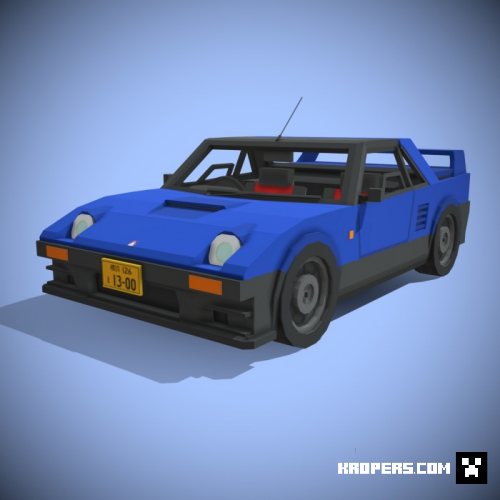 markus
14:26, 02 December 2021
104
0
Here’s something new for the MCPE car market, a kei-class car, a category of cars that are not only small and compact in size, but also powered by engines with a displacement of less than 650cc. And because this is the first kei-car project for MCPE to be made, I decided we start of with one of the most (if not most) famous kei car out there. The Autozam AZ-1, a kei car produced by Mazda’s Autozam brand in a joint-venture with Suzuki from 1992 until 1994. Powered by Suzuki’s 657cc turbocharged inline-3 engine, the AZ-1 was able to produce around 64hp (47kW) at 6500 rpm. When placed into the lightweight body of the AZ-1, brings the total weight of the AZ-1 to just about 720kg. This, with the help of the 64hp produced by the engine, allows the AZ-1 to reach a (limited) top speed of 140km/h. While these values aren’t too impressive when compared to other cars outside of it’s category, that’s not what make the AZ-1 and in general, kei cars, special. It’s compact size makes it fun and easy to drive, not to mention stands out from all the other cars on the road. And as a bonus for the AZ-1, you get fancy gullwing doors so now not only do you have a cool, fun and unique ride, you get to get out of the car and make a much cooler appearance. Ery naice^2

".The Autozam AZ-1, known by the framecode PG6SA, is a mid-engined kei-class sports car, designed and manufactured by Mazda under its Autozam brand. Suzuki provided the engine as well as the inspiration for the design. Manufactured from October 1992 to October 1994, the AZ-1 was noted for its gullwing doors. Power came from the same Suzuki-sourced 657 cc turbocharged engine used by the Mazda Carol that produced [...]" - Wikipedia

To OPEN the doors, right click the car and the doors will open. Right click again to get in.
To CLOSE the doors, right click WHILE shifting/crouching.
I've made a video showing how it's done so if you don't understand words, you can check that video out. The car used in the vid is the Integra DC2 I made a while back, but that shouldn't be a problem as the concept of opening and closing the doors is the same as this car (Autozam AZ-1)