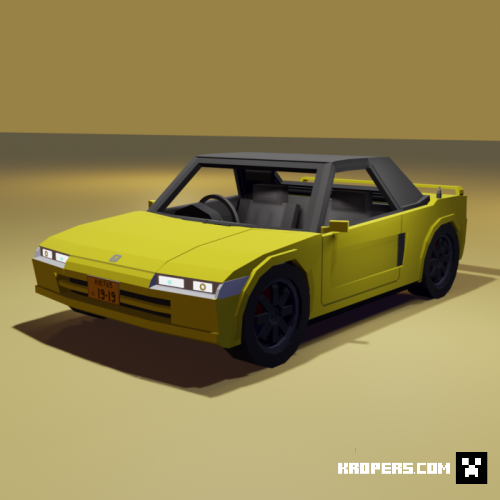 markus
10:14, 01 December 2021
164
0
Ever wanted a compact, fun, fast and not to mention reliable and cheap to maintain convertible? Introducing the Honda Beat, a convertible Kei-car that has all those characteristics. The Beat was a Kei-car that overshadowed most other Kei-cars of the time, and for a reason. It was fast, reliable and just looked sporty which caught many people’s attention. Smol, and sporty. But what made it distinctively unique was that it was mid-engined, an engine layout typically only used in most supercars. And there's more to that than from just appearance. The handling of the Beat was in a whole league of its own - it’s suspension was designed for sporty driving. That, applied with it’s electronically limited top speed of 140km/h, makes driving this small little machine, one hella fun car to drive.

"The Honda Beat is a rear wheel drive, mid-engined two-seat roadster kei car produced from May 1991 to February 1996. The Beat was the last car to be approved by Soichiro Honda before he died in 1991. The total number of cars produced was around 33,600. Most of the production (around two-thirds) occurred in the first year, and then [...]" - Wikipedia

• How to open the doors & How to take off softtop

I've made a video showing how it's done so if you don't understand words, you can check that video out. The car in the video used is my previous Datsun 240z addon which shouldn't be a problem as the concept (animations, door and hood mechanics (in this case softtop mechanics) and sound effects) are the same for this addon (‘91 Honda Beat).

Method 1: Get their spawn eggs from the Creative Inventory. They are classified as spawn eggs. You can search "Beat" or "Honda"  without the " for a more convenient way of getting them.”

• Need a map for a project but suck at building?

A few of my friends recently over at Team Green Build Team (TGBT) have started doing commissions for making maps! So if you do have a project that requires a map then consider checking them out. For more details/information, feel free to check out their MCPEDL creations, Discord server and also the actual website where you can commission them!