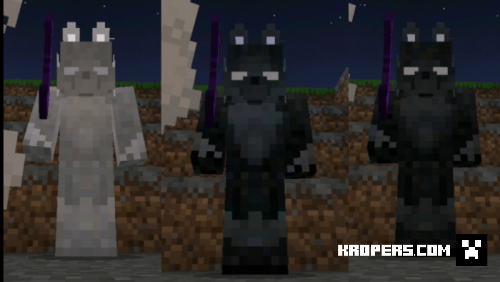 markus
23:58, 30 November 2021
132
0
This addons add vampires and other similar monsters, the addons add an experience of being a vampire and that with time and more updates only tends to improve

The skills menu is unlocked in the werewolf and vampire lv4
To have new skills use the ectoplasm on the glass altar. Ectoplasm is achieved by killing the ghost and possessed humans

Vampire of any level can moderate, just fall in love with the target and press the interaction button.
If you are holding an empty bottle or an unfilled blood bottle when you do the interaction, it will automatically fill with blood

You can be a vampire of any level, with an iron sword in your hand, just approach the villager not yet transformed, and interact.

After being bitten by a vampire, she attacks normal cows, dealing 3 damage

After being bitten they turn into a vampire

It appears during the night and when dead it releases the vampire tooth, has 32 health and 3 damage.

It appears during the night and when dead it releases the vampire tooth, has 45 health and 4 damage.

f
He is a boss and does not attack until he is attacked.
He can be found at night in the dark forest
He has 365 life, and two attacks:
After being defeated he drops the gold tooth

He has 60 life and 4 damage, during the day he is human and at night he is a werewolf
the silver sword normally does 7 damage but the werewolf does 14 damage

He has an ax and uses it to attack vampires, in total he has 9 damage and 40 life. He appears in Vilas and in the black forest

He has a bow, attacks vampire and other monsters. He has 30 life

He has a silver sword, attacks werewolves and other monsters. He has 40 health and 8 attack

You can talk to him to become a hunter, and be able to exchange item with other hunters

Ghosts appear in the dark forest

They appear in the dark forest, and appear when ghosts attack a human

Animals do not appear in the new biome, but many monsters appear at night.

there is a 4% chance that the werewolf will drop. after transforming it is possible to keep the shape of a werewolf if you hold the ring in one hand

It can be made with normal water and a nether star


addition of the decorative item alijava, which can be purchased with the priest

addition of the decorative item cassock, which can be purchased with the priest

It can be purchased from Villager Farmer, it grows and drops 1 or 2 garlic.

Has a 30% chance of dropping from a werewolf

it can be used to upgrade to vampire Level 3.

It can be used to trade with hunters

It can be purchased using the "take the heart" we villager

It can be made using a crafting table and 8 vampire teeth.

It's edible
Has 3 nutrition

It's edible
Has 4 nutrition

It's edible
Has 10 nutrition


It can be done with awkward potion and a vampire tooth

It can be made with a strange potion and a gold tooth. It gives an effect of residence III, regeneration III, Absorption III and night vision.

It can be made with a strange potion and the soul of a vampire king or queen. Gives a residence effect IIII, regeneration III, Absorption IIII, night vision, strength III