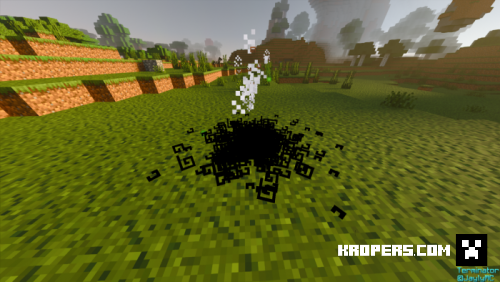 markus
01:29, 29 November 2021
118
0
Introducing Terminator to your Minecraft world! This is a powerful mob that has the ability to follow entities, destroy blocks and build blocks when the terminator thinks it's necessary, pick up melee and ranged weapons such as swords and bows to attack entities, and wear armors such as chestplates to protect itself from being damaged.

This terminator can build blocks to reach its target and break blocks that stops the terminator from reaching the target.

This terminator can attack mobs

Terminator can attack the following mobs:

Terminator attacks a selected mob when both mobs have the right conditions.
For more infomation check out this image of terminator's attack requirement

The terminator can track your location and finds ways to go to the target easily in order to kill the entity.

The test was taken during Terminator's development (v0). The result shown in the video may not be as accurate as the performance in the add-on's latest version.

The terminator can respawn

This terminator can respawn itself indefinitely when it dies.
The following image is taken after the terminator dies.

You can execute /function terminator/killall which kills all existing terminators in the world and they will not respawn.

The Terminator Combat is a major update released for Terminator Combat Update (add-on version 1.3).
In order for the terminator to use different kinds of combat, they need to pick up the weapon in order to switch combat mechanic.
Showcase video:

Melee attack is activated when
Features

Bow combat is activated when the terminator is holding a bow

Crossbow combat is activated when the terminator is holding a crossbow

Trident combat is activated when the terminator is holding a trident

Snowball combat activates when the terminator holds a snowball

The download link will redirect you to linkvertise and github. After downloading the add-on from github and import the add-on to Minecraft, make sure both resource pack and behavior pack are imported so you do not have the error related to incompatibility when applying the add-on.
After you applied the add-on to the world, these are the experimentals options required to be activated in world settings:
This add-on is released for Minecraft version 1.17.30 or above, but there is a chance of it being compatible for Minecraft version 1.17.0
For versions that are below 1.17.30, you need to activate "Holiday Creator Features".