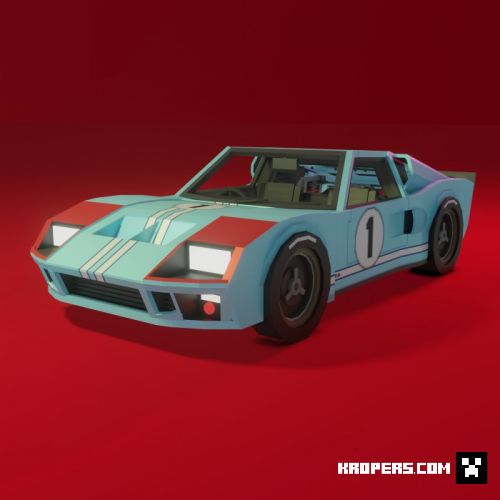 markus
19:43, 24 November 2021
7
0
Reintroducing a staple in not just a little car manufacturer you might have heard of that goes by the name “Ford”, but also a staple in Le Mans and in general motorsports history. A machine produced and developed over a course of 3 years specifically to achieve one goal: crush Ferrari at Le Mans. It was a goal that was set out of pure rage by Ford’s own CEO at the time, Henry Ford II, after failing to buy over Ferrari - not to mention the amount of embarrassment that caused. Was the goal accomplished? Well after losing consecutively in 1964 and 1965, things changed in 1966 when they managed to place 1-2-3 in Le Mans of that year - with the help of drivers such as Ken Miles and Bruce McLaren of course. In other words, it was accomplished and was without a doubt a success, especially for a car manufacturer that had no experience in developing a Le Mans racecar prior to when the goal was set in 1963. In a nutshell, the GT40 MK.II was a car that prove to the world that Ford was capable of making a car that was fast, aerodynamic, sleek in design and capable of winning the rough and competitive endurance race that is the 24 Hours of Le Mans, in spite of experience AND in under 3 years. And if that is not enough to make you impressed, then I don’t know what will. Like alot of cars I've made, while you may not be able to get one in the future, atleast you get to own one in Minecraft with this addon.

"The Mk.II was rebuilt by Holman Moody in California to handle the 7.0-liter FE (427 ci) engine from the Ford Galaxie, used in NASCAR at the time and modified for road course use. The car's chassis was similar to the British-built Mk.I chassis, but it and other parts of the car had to be redesigned and modified by Holman Moody to accommodate the larger [...]"

I've made a video showing how it's done so if you don't understand words, you can check that video out. The car in the video used is my previous Datsun 240z addon which shouldn't be a problem as the concept (animations, door and trunk mechanics and sound effects) are the same for this addon (GT40 MK.II).

Method 1: Get their spawn eggs from the Creative Inventory. They are classified as spawn eggs. You can search "GT40" or "Ford"  without the " for a more convenient way of getting them.”