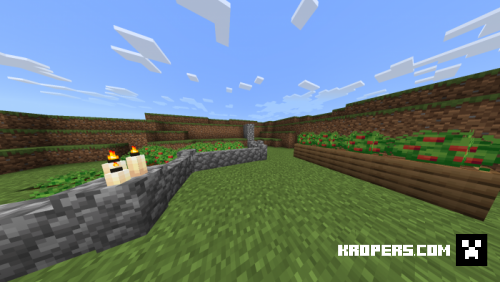 markus
10:13, 23 November 2021
87
0
Welcome to Agricultural Satisfaction! An add-on that rewrites the entire farming mechanic, by making it a big aspect of the game. It adds rewards and challenges to such mechanic, making it a worthwhile and beneficial part of the game. This add-on is currently in beta, so a lot of stuff here may change or be entirely removed in the future.It's very small at the moment, but I plan to expand upon it more with later updates.

There are many additions in Agricultural Satisfaction. Such as:
NEW Crop | Tomatoes
Tomatoes are a new crop of this add-on! You can start a farm of these by collecting them within plains villages. Once a tomato crop has grown into it's final stage, it can drop 1-2 tomatoes. On their own, tomatoes give good saturation and 2 hunger points. You can get three tomatoes and a bowl in a crafting table to make Tomato Soup, which can stack up to 16.
NEW Crop | Avocados
Avocados can be obtained by the Farmer Villager. They can drop 3-4 avocados. To replant them, you must make a pit out of them in a crafting table. It's most important use at the moment is creating Bread with Avocado, a neat little upgrade to bread.
NEW Entity | Butterflies
Butterflies are a ambient mob, they don't do much. But they can really decorate a build by just existing. There are 4 variants,: The Blue Morpho, Red Admiral, Monarch and Swallowtail. You can bottle them up for later use in builds or just collection. Simple but fun.
NEW Equipment | Farmer Hat

The farmer's hat is a new item which allows you to look like a farmer, the item can be obtained by farmers for 5 emeralds. The item's only use at the moment, is the ability to harvest honey / honeycomb for bee nest and bee hives without the use of having a campfire underneath. Although still be careful, hitting them still results in them attacking you!
NEW Entity | Worms
Worms are a very helpful entity! They spawn in taiga biomes when it's raining, be sure to bottle them up since they're quite rare to find and aren't breedable. Worms can eat up dirt to turn them into a new block called Rich Soil.
NEW Block | Rich Soil
Rich Soil is obtained when Worms eat up and produce the block from Coarse Dirt. It can be used for decoration. But it's more important use is the ability to create the Planter Box!
NEW Block and Farming Mechanic | Planter Box
Planter Boxes are very helpful for anyone trying to get into farming, they're made with 5 planks and 1 block of rich soil. Their use is to give more produce when you harvest the crop, you can even plant vanilla crops on them! You cannot plant melons or pumpkins though, since they are different than the standard.
NEW Food Items
There's all sorts of new food items to craft. They're all pretty balanced out in eating times, saturation and nutrition. Be sure to collect them all!

NEW Entity | Beetroot Buddy
Beetroot Buddies are a new helper. They will harvest crops and replant the seeds but won't pick it back up the produce itself. Use your imagination on how to automatically collect the items ;). Beetroot Buddies also have a tired mechanic, if you want them to work very productively, they must have a good sleep. They can sleep on any carpet block. If they don't sleep through the night, they will be less productive and will most likely fail harvesting. The way to obtain them is secret and requires some very strange tasks, but the farmer villager might "help" out with that ;)
KNOWN ISSUES:
ADDITIONAL INFORMATION:

Beta 3 is here with some new additions, tweaks and more!
Additions:
Introducing Avocados, a new crop which can be made into new foods.
Added Mash Potatoes
Added Bread with Avocado
Added Glow Berry Pie
Added Salmon Dish
Beetroot Buddies can now harvest crops for you, they will replant the seeds but they will not pick up the items. They're little helpers. Although make sure they have a good night's sleep at a carpet.
Butterflies look better than ever! They now have a sparkling trail!
Tweaks:
Worms have a smaller chance of turning coarse dirt into rich soil
Full stage crop pings are now less obtrusive.