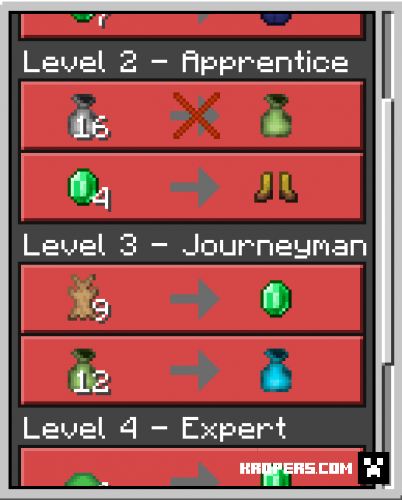 markus
13:26, 22 November 2021
139
0
Common, Uncommon, Rare, and Legendary loot bags make their appearance in your worlds! Though dropped from ALL mobs, the harder the mob is to kill, the higher the drop rate of loot bags, and the higher chance of receiving a legendary loot bag. Trade in your lower tier loot bags for higher tiers at leatherworkers.

Hello Everyone! Those of you follow my Minescape addon are going to notice this is directly from that, this is because as Minescape is growing more and more, there are ideas that I feel don't exactly go in the direction I want the addon to go into. This means I will be removing them from Minescape, and releasing them as their own standalone addons. With this release, I have removed the unique lootbags, partyhats, and the treasure goblin because I want to keep this addon as close to vanilla as possible, if enough people want me to, I will be happy to add in the these items back.
Trailer:
Note that leatherworkers have retained all of their old trades, there is now just a chance of these trades showing up
Leatherworkers have a sort of randomness to their trade list, meaning that you may have to reset a villager numerous times in order to get the trades that you want. Here are some examples.