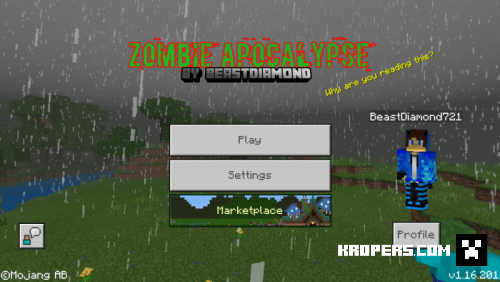 markus
20:04, 21 November 2021
134
0
Yes, I remastered my old zombie apocalypse addon. This one works on Windows 10. New types of zombies has arrived to Minecraft. The apocalypse if back to take over Minecraft! Can you survive?

This remastered version of my old zombie apocalypse addon has more improvements, windows 10 support, and new types of mobs of course!

What are the new stuff made?

This addon changes the ui and textures!
Title screen (Removed since it's useless):

What are the new mobs added?

There are new types of zombies i added. The old ones are still there but i removed the halloween mobs since halloween is already over.

Yes it's still the same as regular zombies but they have more health, you don't need a screenshot for it, nothing exciting about it

This zombie was inspired by my friend "MobD Gaming". You should give him a support, he's a great guy
The blood thirsty zombie is very strong if you get hit by it. It will suck your blood and you will die instantly so be careful don't step too close to it
This mob drops a new item called "Bloody Flesh" which gives you nausea instead of poisoning your hunger

This mob can poison you of course. This mob shoots poison sac at you and you will die really fast from it so don't mess with it without armor or milk just avoid it.
This mob drops a new item called "Poison Flesh" which obviously poisons you.

This mob is similar to the skeleton. This one shoots arrows of course, nothing much used to it just a new type of zombie.

Mojang never added a zombie version of a wandering trader. I've decided to add it to this addon.

Yes this one can poison you, this one was in my old zombie apocalypse addon but i've decided to readd it to the remastered version!

This one wither you, this one was also in my old zombie apocalypse addon. Also been readded!

This one can teleport and it's really intelligent! This is also in my zombie apocalypse addon of course. Readded!

And lastly, the mutant zombie:

This one is a big buff and beefy version of a zombie, this one has been nerfed cause in my old zombie apocalypse addon, this mob is way too strong. Of course it's been readded too.

Hope you guys like the remastered version than my old one, this one took so much effort to make but finally it is done, please support me by subscribing!