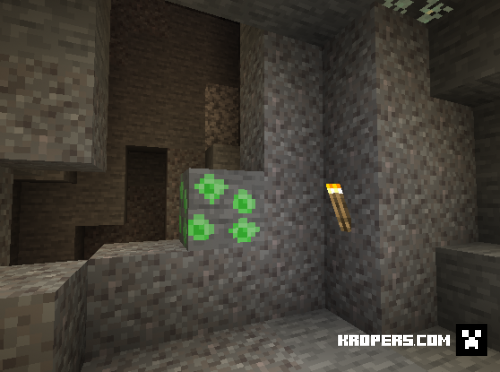 markus
09:51, 17 November 2021
92
0
Tropic is a Jungle overhaul addon that aims to improve jungle biomes by adding in new features. In Tropic you can expect to find new ancient ruins to explore, new fun weapons, new mobs, new foliage, and a lot more.

Lets get into the addon! One thing to note, I have made jungle biomes more common in Tropic. You can generally find jungle biomes spawning off of plains biomes now. Don't like this change? Please let me know.

While your mining underground in jungle biomes, you may stumble upon a brand new ore called Spore Crystal. This ore will begin spawning at Y50 and lower.
There are no tools for this ore. This ore only allows you to craft armor, and will have a greater use soon.
Heres an example on how to craft the armor, its pretty simple like normal Minecraft armors.
The armors total defense is 8.5 bars:
Helmet: 1.5 bars
Chestplate: 3 bars
Leggings: 2.5 bars
Boots: 1.5 bars
Each piece has 300 durability.

There are a few new weapon classes for you to play around with in Tropic.

First class are spears:
Recipe Example:
Netherite Recipe:
Most spear is 0.5 damage stronger than a Minecraft sword but some may be 1 extra. They also have half the durability of a sword.
Wooden: 4.5 damage, 29 durability
Stone: 5.5 damage, 65 durability
Iron: 6.5 damage, 125 durability
Golden: 4.5 damage, 16 durability (Will literally break in like 8 hits lol)
Diamond: 8 damage, 781 durability
Netherite: 9 damage, 1016 durability
Next up, Chakrams!
Chakrams are throwable weapons. They deal very little melee damage (infinite durability!) These are really fun to use. Some also have special abilities. Also, depending on the material, certain chakrams may fly further than other heavier materials.
Recipe Example (The others don't need new sticks or anything)
Netherite Recipe:
Because of Chakrams being a little complex and hard to explain through text, I would recommend you watch the video below as it will go a lot more in depth with ranges, and recipes.
Chakrams Stats:
All Chakrams except for Iron have a 1.5 second cooldown.
Wood: 2 melee, 3 ranged
Stone: 3 melee, 5 ranged
Iron: 4 melee, 6 ranged. 0.5 Second Cooldown
Gold: 2 melee, 3 ranged. Spawns XP upon hit
Diamond: 6 melee, 7 ranged
Netherite: 6 melee, 8 ranged. Can go through walls and mobs
Spore: 3 melee, 7 ranged. Spawns poison cloud that poisons nearby mobs for 2 seconds.

The final weapon class are blowguns!
Blowguns are simple ranged weapons that must be loaded after each shot. There are currently 2 variants of the blowgun. In the future they will receive different dart effects
Main Recipe:
Normal Dart:
Poisoned Dart:
(The item above has more info farther down)
You must craft load after each shot, you can load the unloaded blowgun with any dart.
Stats:
Normal: 10 damage
Poisoned: 8 damage, target receives fatal poison for 2-5 seconds
Enjoy the new weapons!

Whilst exploring, you will definitely encounter new plants.
First up are Jungle Shrooms. They are poisonous mushrooms that can allow you to craft poisoned darts. They are also used for trading. More info on that below!
You can then turn a mushroom into powder.
Next up are the Purple Passion Flowers.
Like all Minecraft flowers, you can turn them into dye, or use them for decoration. (Currently they cannot be placed into a pot, If someone knows how to do that, please let me know.)

There are going to be new dangers as always. So lets show them off now.
First few up are the Mushroom Zombie (Left) and the Mycobrute (Right)
The Mushroom zombie is just a mushroomified zombie. You can find it spawning at night
Mushroom Zombie Stats:
Drops:
Now the Mycobrute, he's no joke. This guy will wreck your face. He is also an early game miniboss.
Stats:
Abilities:
Drops:
Next up we have some Goblins
Goblins are neutral creatures, meaning they will attack only if you attack them. But c'mon, who's seriously going to attack these guys? They just want to be your friend!
There are currently 3 variants of Goblins, more will be added in future updates but for now you got the Tribal Goblin (Left), the Spear Goblin (Middle), and finally the Trader Goblin (Right).
Stats:
Tribal Goblin: 3 Attack Damage, 12 health.
Spear Goblin: 8 Attack, 16 Health, always spawns with a helmet to.
Trader Goblin: 0 Attack (Flees from hostiles) and 20 health.
Goblins at the moment spawn in the wild, they were originally going to have a village, but that was cut as I couldn't get it to spawn. Thats probably because of the way the jungle biome is with all the trees, grass, and hills. Goblins can move into villages, as long as their is a bell nearby. They do not sleep or work, they kind of idle around and act as the village's defense. Goblins will definitely be expanded upon in the future however with new types, their own villages (hopefully), and a LOT more. If you have any ideas for Goblins, I would love to hear about it.

Anyways, here is the Trader Goblins' trade screen.
You will require a lot of Jungle Shrooms as that is their currency.

There are quite a few items that can be crafted in Tropic that will benefit you in the long term.
This is blank powder. This is basically a basic powder that allows you to craft greater powders, such as the...
Healing powder! When used, you will instantly gain 4 hearts of health and regeneration 2 for 5 seconds. Very handy in tough combat situations. You will also get the blank powder back.
This is knowledge fruit. This is pretty useful as when eaten, you will gain 2 random positive effects. Each effect will last for 2 minutes. (Middle item is Brain Fungus)
You can definitely get pretty good combos of effects.
This is the pure heart. When eaten, you will double your health permanently, until you die or drink milk. (Middle item is Heart Shroom)

There are quite a few new ancient ruins scattered about the jungle.
Some structures can spawn with new Jungle Loot Crates. When broken, you can get some rare Tropic or Minecraft loot.
Statue: An ancient, powerful being that was most likely worshiped here long ago.
Decrepit Ruin: May have been an old house of some sort?
Abandoned Temple: Where the ancients gathered to worship higher beings.
Ancient Ruin 2: A tower that might've been used for training of some sort.
Not pictured, Exposed Fossil (Very rare)
And 1 secret structure (Ultra rare, have fun searching)

That pretty much sums up all of Tropic. Thanks for taking the time to read., and I hope you have fun playing around with it!

Enable the following above, and you should be safe when using this addon or most addons in general.