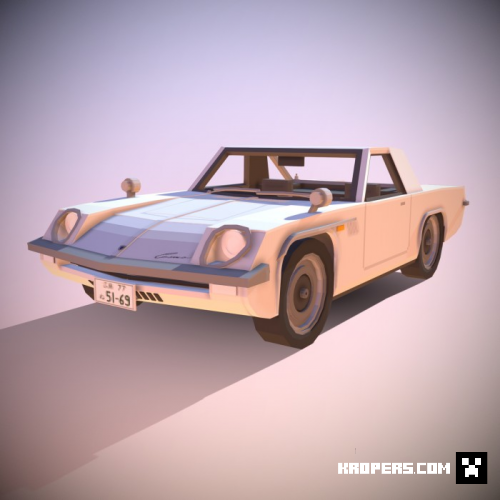 markus
09:32, 17 November 2021
126
0
Here’s yet another car that I’ve wanted to do for ages, the one and only Cosmo Sport L10a, a coupe that marks Mazda’s first car to be fitted with everyone’s favourite engine type, the rotary/Wankel engine,  and as such, introduced Mazda to the world as an upcoming, unique and technologically advanced car manufacturer. Aside the use of the rotary engine, in this case, the 1.0L Mazda 10A (0810 for Series I/L10a) rotary engine, it had the design that challenged that of other European sports cars of the time. Weighing just about 980kg and being able to produce a respectful 110hp at 7000rpm, the L10a could reach a top speed of up to 185km/h which wasn’t solely just impressive for its time, but also considering its relatively low displacement of just 982cc (1.0L) and it’s affordable price of ¥1.48 million or US$4.1k (thats US$13k in near present day) at the time. Affordable, powerful, sleek design and most importantly, powered by a rotary - what else could you possibly want?

This time’s car project is a project I’ve wanted to do for ages as the Cosmo L10a is personally one of my favourite cars of all time. Even though this project was made in somewhat of a rush as I was busy with studies whilst making this, I’m quite pleased and happy with how it turned out. I hope yall will enjoy this car project as much as I will/do (:

"The Series I/L10A Cosmo was powered by a 0810 two-rotor engine with 982 cc of displacement and produced about 110 hp (thus the 110 name). It used a Hitachi four-barrel carburetor and an odd ignition design—two spark plugs per chamber with dual distributors. A four-speed manual transmission and 14-inch wheels were standard. In Japan, the installation of a rotary engine gave Japanese buyers a financial advantage when it came time to pay the annual [...]"

Engine bay
Rear profile
Interior
Misato Katsuragi banner
(I originally made this as a prop to go alongside the “NERV Business Coupe” for a few photos to be posted onto Instagram and Twitter. Soon realized people might think that the banner will come with this pack (I originally didn’t plan to make it come in this pack) and will harass me for not adding it in. Can only be spawned via /summon [refer below for full command].)
-Front
-Back
Thumbnail without stuff

I've made a video showing how it's done so if you don't understand words, you can check that video out. The car in the video used is my previous Datsun 240z addon which shouldn't be a problem as the concept (animations, door and hood mechanics and sound effects) are the same for this addon (Cosmo L10a).

Method 1: Get their spawn eggs from the Creative Inventory. They are classified as spawn eggs. You can search "Cosmo" or "L10a"  without the " for a more convenient way of getting them.

Contact me through one of my contacts listed above and I’ll send a direct download link whenever possible, no Linkvertise restrictions!
This addon is exclusive for MCPEDL. Any other websites/apps that distribute this addon without my approval are false and are an act of plagiarism.