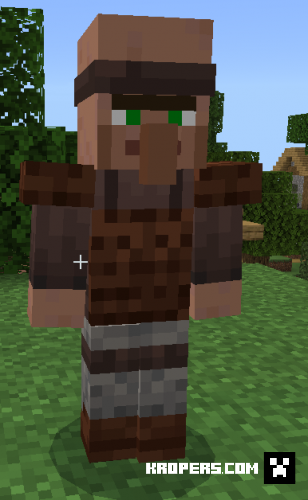 These are villagers soldiers, these soldiers we can see anywhere because these are adventure soldiers to help the villages from hordes of vicious zombies.
This soldier is very mobile when near he will hit melee with his sword and when far away from the opponent he will use a crossbow to shoot distant targets.

How to become a soldier:

Note: Any villager can become a soldier except children and the green villager (I don't remember its name).

This is a villager using a bow or can be called a villager archer. This villager has a long-range and can be enchanted with a bow. This villager can be transformed from a villager who specializes in bows and arrows (I don't remember the name of that profession, sorry everyone). Just like villagers use swords, villagers can also become archers by giving villagers bows. Villager bow doesn't trade.

How to become an Archers:

With the rise of the illager faction, the evoker has risen to a new level as the evoker legend. And the appearance of the military forces Pillager Bandit has completely changed the whole world of Minecraft.

This is a mob similar to an evoker, but with more advanced magical power.

Villager Magic is someone who can use summoning magic to summon destructive spears of justice and iron soldiers. He has the ability to turn zombie villagers into villagers faster than the golden apple.

Video about skill of them:

This is an iron soldier, which can only be summoned by Villager Magic and lasts only 20 seconds. High damage, mobility, each summoning will be 3 entities.

Video of the battle of the 2 factions:

This is the general guarding the treasure in the bandit city. This is a bloodthirsty killer. He was stronger than the other illagers, so the illager council sent him to guard the strongholds to keep the treasure.

This sword will drop when killing pillager general but is very rare.

This is an armoured warrior of the illager faction, with a high level of strength, he is a formidable opponent of the villager faction in battles. He was assigned by the council to guard the small town where the illagers were resting.

This is an iron golem but with additional armour. Don't think that it's wrong to just wear more armour and nothing else. After wearing armour, the golem will gain health and double the running speed.

This is the new warrior of the villagers, for the sake of unification, the villager warrior will only have 1 outfit for all biomes. In addition, the player can make it their soldier by giving the Villager Guard an emerald.

How to go to guard duty:

The crafting recipe was confused with the shovel's recipe. You can craft both via hints. I will fix this bug in version 4.

This is not a soldier this is a statue made of diamonds that can bless the player and all villagers and iron golems.

Video of a raid battle in version 3:

Some changes in version 3:

Note: Any villager can become a soldier except children and the green villager (I don't remember its name).

THIS IS THE FIRST VERSION SO I WANT EVERYONE PLEASE COMMENT SO I IMPROVE ADDON IN THE FOLLOWING VERSIONS.

IN ADDON I HAVE TO USE THE SKIN OF THE JAVA VERSION.