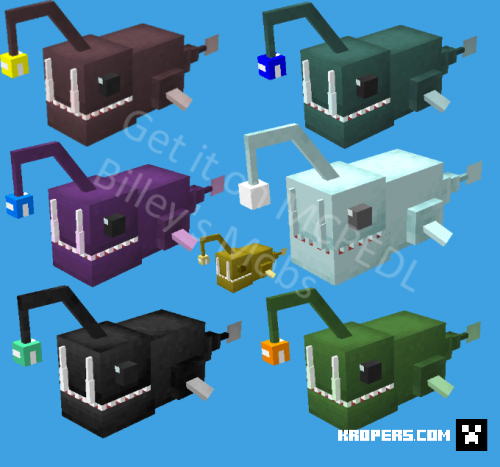 markus
14:50, 14 November 2021
147
0
This is an add-on which implements 26 new mobs to the game as well as a boss and many items. It's a great addition to the game if you want more pets or fish. The mobs include everything from sea creatures such as the sharks and the pizzafish to pets which live on land such as the banana duck and the skeleton cat

Similar as the Zombie Cat but it's tameable with Netherwart and brings you random Nether items when you wake up. It's also neutral to players but sometimes an aggressive skeleton cat spawns in instead which attacks players and normal cats. Dyeable. billey:skeleton_cat

Same behavior with zombie cats, but they have variants and the only way of getting one is using a sad potion on a cat or a skeleton cat. billey:zombified_cat

Now work even if the advancement add-on isn't installed, but if it is installed you'll also get that "Advancement Get!" UI. Make sure billey's mobs is above that addon in the behavior pack list though

Recipes on the end of this page or in the recipe book expect for velvet slime blocks because blocks can't be added to the creative inventory/recipe book.
NOTE: Most of the items are in the horse armor category in the equipment tab, the rest are either in the bottom of one of the creative tabs or in the category they'd be if they were vanilla items.
Also not every item is listed here, some are listed in the mob used to obtain them

deals 14 hp(7 hearts) damage to fish, orcas, picklepets and penguins, and you can cook it to a swordfish steak no matter its durability left. billey:swordfish. It also instantly kills vanilla salmon and tropical fish, and when used to kill a cod or a piranha it kills 5 nearby ones as well, can be upgraded to a golden enchantable version (billey:golden_swordfish) in the crafting table with shark teeth, see in game crafting table recipe book or the recipes below

5 new variants, spawn at jungles but still also spawn at villages. Raise and move their tail when you hold food, defend owner from animals and babies.
Parrots can now have the colorful potion and the bird hat put on them and be fed sand bananas, also you can now heal them with seeds(preferably not the wheat ones) and they can no longer be killed using cookies.
See "Taming the fish" below

Putting the fish in a bucket

Every fish in the addon can be put in a bucket, even though the bucket might look like it has a cod in it

If you want an aquarium with multiple types of fish and don't want them to eat each other then tame them. Most of the fish from this add-on are tamed using sea pizza which is dropped by pizzafish, with the exception of pizzafish which are tamed with rotten flesh and vanilla fish and catfish which require seeds or carrots. You can also heal fish with the item used to tame them and leash them after taming them

You can pet any mob in the addon, vanilla cats, cod, salmon and tropical fish after taming it by sneaking and then pressing the button you press to shear sheep. Petting a mob has a chance to give it positive effects without particles, regeneration is very rare. The cats purr and make animations when pet. Because of this, do not sneak while trying to ride a cucumbeel and to make a rideable duck or banana duck sit or stand, sneak while holding a fish sword or a golden fish sword. No player files were modified for the hand petting animation

Right click/long tap on a tamed mob from the addon that can fly or walk or a vanilla cat or parrot with a stick to make it walk around instead of following you, do it again for it to follow you again. Only the owner of the mob can do it and it does not work on snails for some reason, though they never teleported to their owner so it shouldn't be much of a problem

As of 1.16.100 you don't need to look here to see the recipes because they are in the recipe book, expect for velvet slime blocks because blocks can't be added to the creative inventory/recipe book(without requiring the beta at least).
Shapeless means that the order you put the materials in the crafting table doesn't matter
oops looks like i kinda messed up the picture, at least the recipe for the blocks which aren't in the in game recipe book is correct

In order to use this or most addons on realms, (if you haven't done this already of course) download the realm's world, turn on Holiday Creator Features and Upcoming Creator Features, also, if you see an "Experimental Molang" toggle turn it on, and then upload the world to your realm and of course add the the addon afterwards

This addon modifies the model, animation, behavior, client entity file and render controller of vanilla cats, so make sure to put it above(in the resource pack and behavior pack world settings) anything that modifies these because their reason for modifying these files is probably less important, eg. JujuStyle7's New Mutant Creatures modifies the cat behavior just to make it run away from mutant creepers and several bug fix and java parity packs modify the cat model for probably nothing noticeable, probably tail z fighting which this addon also fixes, same for vanilla cod, salmon and tropical fish
if you don't have time to read that: simply just put both packs above anything that does any sort of modification to vanilla cats, parrots and fish, not putting this above such packs will cause these: