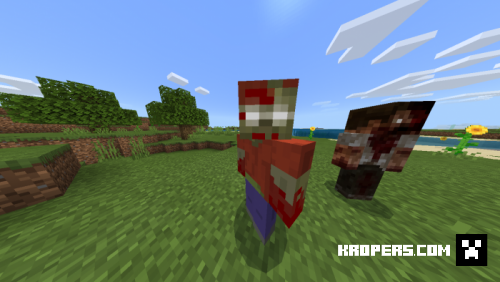 markus
17:55, 11 November 2021
110
0
This addon adds new zombies to your game, besides having several other zombie variants, which makes this add-on more difficult, and also many other creation tools!, which will make it easier for you to survive on this journey!!

This is the most common zombie you will find he is pretty much a normal vanilla zombie, but he is much stronger!

This variation is almost similar to the first one but it is stronger and runs much faster!

This variation is called Zombie Runner, it is stronger than the previous variation much faster if you see it and better to run if you have inferior equipment, it also gives you Slowness effect.

This variation is called Poison Zombie he is very weak but when he hits you he will give you poison effect for 30 seconds, that is, and better keep your distance!

This variation is called Caminhante it will give you considerable damage, and Nausea Effect.

This variation is called Walker it will deal the same damage as the previous variation and will give you hunger effect if it touches you.

This ore is called Steel, it will spawn all over your world you can find it in layer "20" below, it will be useful for making armor and tools!
we also have a new block, made of steel, but it only serves as decoration.

This is a functional axe you can use it to chop wood and also use it as a weapon, but it is very slow to break the blocks I will fix this in the next updates!.
:craft


This is Crowbar she is a weapon that has considerable damage, and very efficient!
Craft:
This weapon is the Machete, it is practically the strongest weapon in the whole Addon!
Craft:

This baseball bat will be a very good weapon for a survival start.
Craft:

This silver pickaxe is the best pickaxe for breaking Steel ore!
Craft:


This item will be dropped after killing a zombie, it is used to make armor...

This First Aid Kit is the most Op food you have in the Addon, it regenerates your health almost instantly and you are also invincible for 30 seconds!
Craft:


This Morphine when used it removes all the effects of the zombies!!!!
Craft:


This bandage will give you regeneration for a short period of time, it is not very efficient but with it you can manufacture Morphine!
Craft:


This item can be dropped by zombies, it is the best food in the addon.


This Bacon is dropped after killing a pig, and can be roasted.
ARMOR