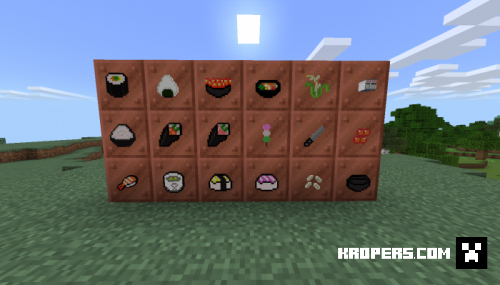 
Are you bored of the same old food?
This addon adds more than 10 Japanese foods and more functions to your world!


Foods
This addon adds more than 10 Japanese foods such as:

All these meals will have to be prepared from the Japanese Stove, a stove that adds this complement in which recipes for all meals can be made, its preparation is as follows:


With only three iron blocks, three carbon blocks and three heavy pressure plates you can get this block

All the crafts can be shown inside the Japanese Stove as well as in the following image:

Some of the objects such as the Knife and the Dish cannot be crafted, since these objects, the Tea and the Rice Seeds can only be exchanged by the Cheff.

This Cheff will carry a tied panda with him, and he can also appear in your world in a random way.
Each chef will be able to exchange different things, but the only things that we will be able to find with him will be the Tea, Rice Seeds, Dish and the Knife.


In addition, they will exchange things that can be used in the crafting of food such as kelp, dried kelp and more.

(Can be grown naturally or with bone powder)

The rice crops can help the player to get the rice plant that later in the Japanese Stove can make the rice seeds which will be used for most of the aforementioned meals.

Special functionalities
The Roe can be obtained by the salmon, which will release Roe every certain time.

Pandas can now be tied with the straps

In addition, the Knife can be enchanted with sword enchantments