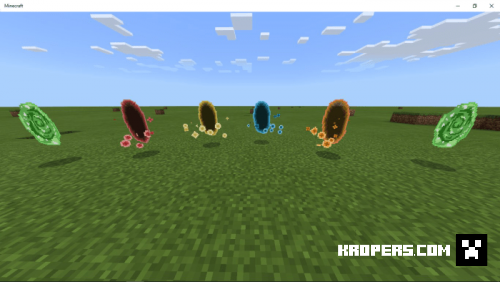 With this add-on a portal gun item will be added in your world. The portal gun is quite easy to craft.


There are 3 different kinds of portal guns the portal model will depend on what portal gun you use.
A short demonstration of the portal gun:
Portal Gun Recipes:

You can freely switch what color of the portal to shoot by CROUCHING and SHOOTING the portal gun.
You can see on the portal gun what portal color it would shoot.

How can I pick up blocks?
How can I place the block?
To convert it to the portal gun again shoot directly down.
If there is a block in its place it will break that block and drop it.
For now you can only pick up the following blocks:
Will add more blocks in the future.
Comment the blocks you want to be added in the next update.
Credits to the commenter for commenting this idea: Step_HD

Anything that gets close to the black hole will get suck in and killed including you and your items.
I Have also added a page on How to play for the portal gun so you can have an easy guide on how to use the portal gun and also how to craft it.
Settings>How To Play>Scroll to the bottom

If you are worried about if this version is compatible with your device, this version is compatible with win10, mobile and other devices.
The scripts version removes all the limits of the normal portal gun version, no limits to how many players can use the portal gun, portal guns are now player tied instead of item tied this covers the blackhole gun and the levitation gun.
The only changes is how you place blocks using the portal gun, instead of sneaking you can only shoot the blocks. This is due to some bug in the scripts not detecting if the player is sneaking.
I have only tested this with only 2 players in a world, not sure how this would perform in a world of many players.

Before Installing:
Downloading through Linkvertise: