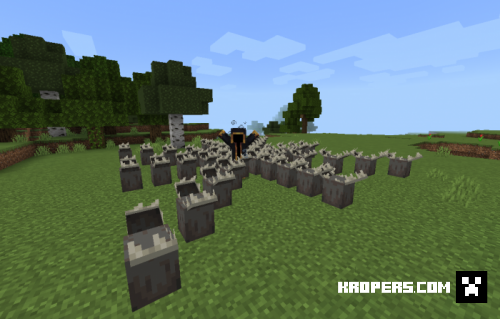 markus
18:21, 07 November 2021
146
0
This addon can be useful for people who when the game is over it is very easy or they simply do not know what to do anymore This addon adds new structures, items, bosses, armor, ores and content in general!

This has an attack similar to the Evocation Illager only that it is much stronger and in more area!
The Evoker can summon a corrupted iron golem that has much more health and much more attack than a normal one.
The Evoker can be summoned by using a totem in the center block of its structure.
This one when dying will drop essence with which you can craft magic artifacts
When using this item you will attack as the evoker for a few seconds, this item has a cooldown when used
Using this item will give you regeneration and absorption for a few seconds

The name of this spider is because when it attacks you it gives fatal poison,the difference from poison to fatal poison is that it can kill you
This spider can trap you in its web for a few seconds
This Spider can multiply into smaller spiders
These small spiders have less health and less attack but give blindness when attacking you
The Fatal Spider is found in a cave below the surface.
When he dies, he can drop 1 to 3 fatal eyes with which armor sets can be crafted
When you have this helmet equipped it will give you night vision
When they attack you with this equipped chestplate, it will give fatal poison to nearby mobs
Equipping these leggings will make you immune to poison.
By equipping these boots it will give you saturation
When you attack an entity with this sword it will give it the effect of fatal poison
And when this is used it gives high level poison to nearby mobs and has a cooldown when used

Floppa is a caracal, his only special ability is having a lot of strength and being a meme
Floppa spawns in his own pyramid full of attacking cats and they have a lot of life
Floppa when dying drops the "Floppa ears" or "Floppa's Axe"
By using the floppa axe you can destroy entire trees
Having the floppa helmet activated will give strength 2

This one does not have much life but the armor reduces the damage a lot
This one features a bow and a sword
The Knight can use their shield like a player,when he uses the shield the only way to hurt him is from behind the shield
The knight spawns in a small lookout post
When he dies he can drop from 1 to 3 of his ingots
Each piece of this armor adds 2 health containers except the chestplate that adds 4 hearts
This means that having the full armor would add 2 full bars of life
The BlacksMith
The Blacksmith spawns in the nether with a low probability
The Blacksmith can attack like the sword sweep from minecraft Java doing area damage.
Every so often he fills the ground with magma that if you touch the magma it will give you negative effects wither, slowness and weakness
When he dies he drops 1 to 3 ingots
Having this helmet equipped will automatically smelt all minerals.
By having this chestplate equipped when they attack you, it will burn the closest entities
Having these leg loops equipped will give fire resistance
Walking with these equipped boots will turn the lava under your feet into stone
By using this sword you will deal sweep damage

The Anti Enderman spawn on the end with a low probability and only on hard difficulty.
He can generate clones which will have 1 life and will explode after a few seconds
The Anti Enderman can generate crystals that explode in a chain and the same attack as The Evoker
Apart from all these abilities it can give blindness
When he dies he can drop 1 to 3 ingots
Having this case equipped makes you immune to all kinds of explosions
When you have this chestplate equipped and they attack you it will cause all nearby mobs to invoke evocation fang
Equipping these boots will give you level 1 speed

Destroying this ore will freeze you and give you a 1 to 2
When they attack you with any piece of armor it will slow down the closest mobs
Attacking a mob with this sword will slow it down
And when using it, it will completely freeze the closest mobs for a few seconds
Using this sword will create small End Crystals that will explode after a few seconds.
This item works the same as an ender pearl with the difference that it is infinite and faster
Attacking a mob with this sword will burn it
And when using this item launch 3 bursts of fire as a blaze