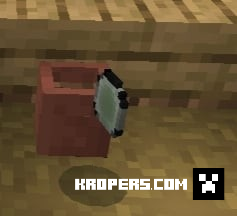 markus
14:03, 03 November 2021
104
0
Do you want cool new mobs and items added to Minecraft? Say no more! This Addon adds skillfully designed mobs to the game that you can interact with and obtain exclusive items that adds more spice to the vanilla game!

-once an adult white spike is killed, it has a chance to drop its thick carapace that you can use to make the strongest armor in the game(Stronger than Netherite Armore)
-can be used to repair White Spike Armor
-White Spike Claw

-has a durability of 556
-enchantable
-has a unique spiky design
-has  unique dirty white color
-can be repaired with white spike carapace
Here is a preview of a fully-enchanted White Spike Gear:

Colossal Squid
-the largest known species of squid because of deep sea gigantisism can be found in the deepest oceans of Minecraft! The neutral creatures eat guardians and drowned zombies
and can attack you when you attack them, be careful though because they can be very fast when they're provoked, don't let their gentle
movements fool you!
-adult Colossal Squids can be bred with salmon, cod, and rotten flesh and produce a single offspring. After giving birth, the colossal Squids
will be able to breed within 2 game days (about 20 minutes)
-when an adult colossal squid is killed, it drops one or both of its eyes and tons of meat that you can cook in any block that can cook meat (furnace, campfire, soul campfire and smoker).
I'd rather breed and farm them because its body parts have many uses especially its eyes, it could really help you travel the oceans ;)
>Adult Colossal Squid<
-has 60 health
-has 4 attack damage
-follows you when you are holding rotten flesh, salmon, or cod
-can be bred with salmon, cod, or rotting flesh
-kills drowned zombies and guardians for food
-drops 8 to 16 colossal squid meat when killed
-drops one or both of its eyes
-sometimes move around in circles(probably a bug)
>Baby Colossal Squid<
-has a pale-looking skin
-has 10 health
-has 1 attack damage
-kills fish and axolotl for food
-no drops
-slower than the adult colossal squid
-has a unique pale color
-grows in size over the course of 1 game day (10 minutes)

New Boss Mob! The Jade Dragon
-spawns rarely in extreme hills
-drops its heart when killed which has many uses
-explodes when killed, leaving behind its heart

Jellyfish
-say hello to these colorful creatures that spawns in minecraft's oceans
-spawns in warm oceans, especially in coral reefs
-drops slime when killed to be used for crafting slime blocks
-comes in 4 variants
-harmless
-has 18 health points
Purple Jellyfish
Green Jellyfish
Blue Jellyfish
Box Jellyfish
-be careful not to attack this variant because it can sting you and the only way to remove the effect is to
kill a live specimen and pick up its remains, then used in a brewing stand to make an antidote
-has longer tentacles than regular Jellyfish
-more translucent than the other variants, so it may be hard to spot

New Boss Mob! The Phoenix!
-this mythical bird spawns very rarely in the overworld
-immune to fire damage
-currently flies at a low altitude
-turns to stone when it's raining and doesn't take any damage from entity attacks and can be leashed
-turns back to its original state when the weather is clear
-attacks hostile mobs
-hates pillagers
-protects villages
-can be tamed using a nether star or a golden apple and will give you some of its Godly powers in the process
-taming this mob has its drawbacks as it will give you bad omen every 3 game days
-has 2 randomized attack types: ranged, and melee attack
-currently has no drops
[Structures]
Wizard House
-found in taiga biomes where the wizard lives
-has random loot in the chest
New Items!
New Food!
Colossal Squid meat
-can be cooked into cooked colossal squid meat for food
-has equal nourishment as beef
Colossal Squid Eye
-has be used to make "Potion Of The Depths"
New Potion!
Potion Of The Depths
-a collection of effects to help you travel the ocean depths
-includes absorption, night vision, and water breathing
-can be brewed using thick, mundane, or awkward potions and a colossal squid eye as the reagent
-can be upgraded with redstone as the reagent to make the effects longer lasting (bugged, i don't know why it doesn't work but i coded it correctly)
-can be upgraded with glowstone as the reagent to amplify the effects(same bug as the redstone upgrade)