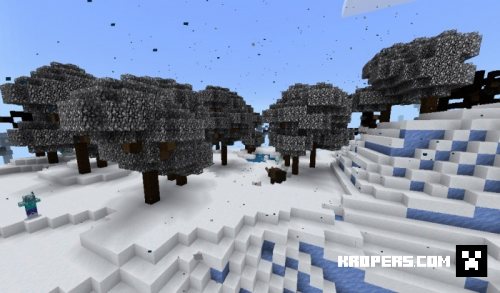 markus
13:55, 03 November 2021
148
0
Are you a fan of the snow Biome in Minecraft then this add-on is for you as it brings a new Biome called the Frost Valley to the game. This biome is packed with new mobs, features and adventures. There are even new structures.

Frost Valley:
This biome was cursed by the ice age and was left covered with eternal snow. Due to this new species started to born in this area making it a quite dangerous biome.
Mobs:
Frozen Zombie:
This zombie spawns in the Frost Valley and are probably the undead citizens after the ice age.

Artic Foxlin:
This mob is a custom mob which roams in the Frost Valley and is quite dangerous.
Artic Foxlin Brute:
For a tough fight, the Foxlins hired a brute to execute each entity which they don't like.
Snow Fox, Bison:
These mobs are passive and can be a source of useful items.
Wendigo:
This long monster is extremely hungry and feeds on flesh. It drops Wendigo bones which can be used for crafting a special weapon.
Yeti:
This big monster is extremely strong and not to be messed with. They now drop heart of the frost.
Tools and Weapons:
Frezynite tools: This tools are decent to use but have a longer durability.
Frezynite sword:
Frezynite picaxe:
Frezynite Shovel:
Frezynite Sythe:
Frezynite Hoe:
Frost Saber:
Starvation blade (wendigo sword):
Frezynite bident:
Frezynite dagger:
Armor:
Frezynite Armor:
Artic Fox Armor:
Other Features:
Frezynite Crystals and ore, wendigo's bones, Artic Fox hide
New items and entities:
Frezynite blocks,heart of the Frost(cannot be crafted), yeti's might and viking and their commanders.
Frezynite blocks:
Hard to carry Frezynite? Now you can store them as blocks.
Yeti's might:

This can be crafted using the heart of the Frost which is dropped by the yeti. This can give you incredible strength.
Vikings:
When the Foxlins started to conquer the Frost Valley, the Vikings came and settled in. They are friendly to players but kill all others which includes Foxlins and other monsters. You can trade with them and they give nice trades.
Vikings Commanders:
These mobs rule the Frost Valley with their might. They have great strength and control the army.
Structures:
Now the Vikings need a place to live,so I created structures that naturally in the Frost Valley.
Viking's tower:
These towers are used by Vikings to spy on Foxlins.
Viking's Winter Rest house:
These house have some nice comfort and even has a hut near it.

Turn on all the experimental gameplay then on both resource and behavior pack. If the biome does not spawn check nearby or create a new world.