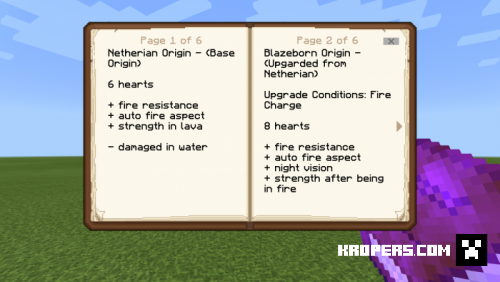 markus
09:32, 03 November 2021
266
0
This is a Bedrock Edition addon based on the Origins Mod for Java Edition, however these origins are not the ones from the original mod

This addon has 5 origins: (Stage 1 Origins) Netherian, Miteling, Sapling, Frozenborn, Crawlian
4 Elementals: (Stage 1 Elementals) Log Burner, Stormborn, Dropling, Basaltling
and 4 Classes: (Stage 1 Classes) Recruit, Apprentice, Forager, Hunter
Those above are the base versions, by doing specific things you are able to upgrade them, most of them are just upgraded twice, but one has more options. Below it'll show you a quick description of all base origins, elementals, and classes. When you choose one you will get a book explaining your abilities and how to upgrade so that has been removed from this page so you don't have to scroll as much
This is v3, the final version of this addon, here I have removed a class that was pretty broken, added books to help you with your origin, added ways to customise origins! (happens when you do /function start), and tried to fix things

Here is an example of a book

This is a picture of the Continential Elemental, if you choose the basaltling elemental and upgrade it, you become the continential, one of this elementals abilities is that it turns invisible near some forest mobs as seen in this picture

Below is a picture of the forager class holding a fishing rod, one of its abilities is to auto enchant some fishing rod enchants


And here is the last picture
This is a picture of the recruit class, it spawns with some items and automatically gives some items enchantments, only some of them spawn with items instead of ability glass blocks

Now here are some short descriptions of the base origins (also includes elementals and classes but it's easier just to write origins):

Netherian Origin -
Fire and nether based origin, doesn't have a glass ability at any stage

Miteling Origin -
Enderman based origin, ability can teleport you can you get a second ability after upgrading

Sapling Origin -
Tree/forest based origin, you don't need to eat but don't get caught in fire

Frozenborn Origin -
Snow and ice based origin, has a passive frost walker ability

Stormborn Elemental -
Air and storm based elemental, likes to fly

Dropling Elemental -
Water based elemental, you can breathe on both land and in sea

Basaltling Elemental -
Earth based elemental, can be very good or very bad based on the situations when maxed out

Apprentice Class - (Base Class)
Mage based class, has a lot of options for upgrading

Forager Class - (Base Class)
Explorer based class? would probably be good for using in a solo world

Hunter Class - (Base Class)
Ninja based class, good to sneak up on people with

Once you are in the world do /function start
after you have done this a structure should pop up with a barrel,
click on the barrel and take out whatever you want to be
once you have done that you just have to throw it on the ground

to restart your choice or someone elses choice, add the tag "restart" to them, like this:
/tag Crimzonn add restart