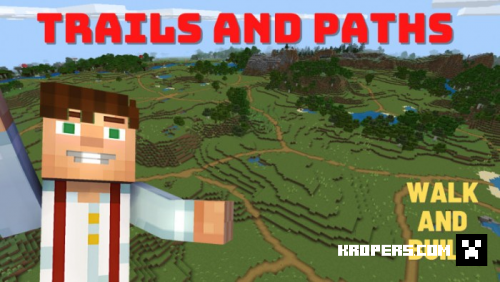 markus
12:14, 02 November 2021
122
0
O Trails and Paths addon (Walk and Build) It has 5 levels of configuration and lets you leave tracks for you wherever you go, or build paths as you walk. Can be used in mode Trail, suitable for playing survival just leaving tracks and avoiding getting lost. or the way Path which is more aggressive and creative, and can create great distances along the way.


It has 5 levels. The level must be changed by function via commands.
The commands are:
By pressing the ESC key, you can check which level is configured.

For those who just want to leave a trail in their path. This helps you remember where you've been and avoid getting lost.
Create tracks on the following blocks:

When starting the game, it is already configured to use level 2, which is the default. Can be changed by command.

Spaced trails of dirt (may turn to grass over time).
Change to this level, type the command /function t1.
trail 1 in the forest

Trails with good frequency of dirt (can turn into grass over time).
Change to this level, type the command /function t2.
trail2, default.

Trail2, default. In the snow.

Instead of Dirt, it uses Coarse Dirt (the trail does not disappear with time).
Change to this level, type the command /function t3.
Trail 3. Coarse Dirt

More aggressive mode that makes it possible to create paths with a width of 1 or 3 blocks.
Create tracks on the following blocks:

Can be changed by command. Display message in actionbar to remind you that you are in more aggressive mode.

To disable any active trail or path , enter the command /function tp_off.