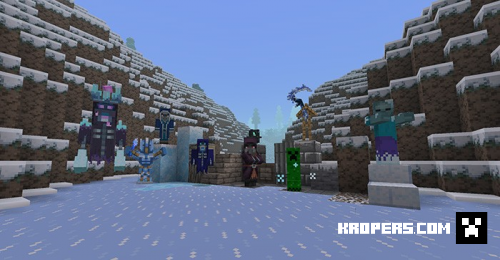 markus
14:53, 01 November 2021
215
0
The Frosted Expansion Pack brings in various mobs from the Minecraft Dungeons DLC: Creeping Winter. The colder biomes of Minecraft have become an even more chilling place to be. The Creeping Winter is probably one of my favorite DLCs (I like that you get a little fox pet too, I named him Glacier) and I would love the see a winter biome update because the base one seems pretty boring.

This addon brings 3 new hostile mobs; The Frozen Zombie, the Iceologer, the Icy Creeper, and Wraiths. Wretched Wraith Boss, as well as the Illusioner miniboss, are included as well.

Attacks
Throws a snowball that inflicts its target with slowness as well as damaging 4 hearts and then will dash towards its target dealing attack damage of 3.
Health
20
Behaviors
Just like a normal zombie.

Attacks
Summons a chunk of ice above its target head that follows it around until finally crashing down on them
Heath
30
Behaviors
Only spawns on ice mountains and spawns at any time of the day.

Attacks
Shoots fireworks arrows that deal a lot of damage.
Health
Illusioner - 188
Illusioner Clone - 1
Behaviors
When the Illusioner senses a target nearby it will vanish then reappear with multiple clones of itself. The Illusioner can also blind the player. Only spawns in Illusioner Campsites.

Attacks
Spawns fire on its targets in a 3x3 square.
Health
20
Behaviors
Mainly spawns in the Soulsand Valley. If its target gets too close it can teleport away.

Attacks
Can shoot a ghost fire projectile at its target. There is also a chance it will teleport away to do a row projectile attack.
Health
600
Behaviors
Can only be found in the Lone Fortress arena. The Wretched Wraith at first spawns in a crown state but when right-clicked/tapped on it will awaken.

I thought it would be best to recreate the items from the game itself just make sure when creating your world to have Holiday Creator Features on.

Usage
Spawns in a block of ice that does lots of damage. If used properly this can be pretty fatal and very useful against large groups.
Drops
Spawns in Frozen Pillars in the Alpine Glaciers.

The Frost Slayer is an indestructible blade that is freezing to the touch and never seems to melt.
Usage
Does 8 attack damage and when right-clicking or tapping and holding the blade it will start an ice rain effect. (The wielder will not be damaged by the ice blocks)
Drops
Dropped by the Wretched Wraith

This legendary armor, forged from ice that never melts, makes the wearer feel as if they are one with winter.
Armor
This armor set can only be found in Frozen Pillars in the Alpine Glaciers biome and when wearing the full set the player will inflict hostile mobs with slowness creating a chilling aura like in the Minecraft Dungeons game.

Ice biomes such as the snowy tundra, frozen river, the cold taiga, and ice mountains have a more blue fog to create a winter effect. Grass and dirt have been replaced with snowy grass and soil. A new biome based on the lost settlement level in Minecraft Dungeons was also added.
Alpine Glaciers
This biome comes straight from the Lost Settlement level in Minecraft Dungeons with glacial ice covering the land.

Frozen Pillars
The Alpine Glaciers biome has a chance to spawn frozen pillars. At the top of the pillar is a strange glowing ice block that when broken can contain parts of the frost gear or the ice wand.
Ash Trees
Uses ash logs and oak leaves
The Illusioner Campsite
Holds the Illusioner miniboss and also comes with invisibility potions in a cauldron.
Destroyed Igloos
Igloos based on ones seen in the Frozen Fjord level and can spawn either with or without a snowman build
Settlement House | Ice Lamp Arena
The Settlement House can only spawn in the Alpine Glaciers biome and underneath it you will find the Ice Lamp Beacon arena.
Nearby is an Ice Button, when clicked on you can activate the ice lamp beacon and start a challenge to get good loot or even the ice lamp itself. There are 3 stages and the Lamp will show a clock hand indicating how much time you have
Stage One
Stage one starts off by spawning in multiple frozen zombies, strays, and spiders and you must survive long enough to make it to the next stage. When finished another settlement trigger will replace one of the blocks nearby.
Stage Two
Similar to stage one but spawns Iceologers instead of spiders.
Stage Three
For the final stage, the spawning is very similar to stage two but faster. Once the timer is finished a diamond chest will spawn with your reward.

All these textures were ported straight from MC Dungeons I do not own any of these ?
Do /function blocks to obtain all the blocks added
The Ice Fortress Lamp
When clicked the lamp will turn on. Cannot be crafted in survival but can be obtained from the Settlement House.
Ash logs/wood
Can be used to make Ash Planks which can be used and crafted with like normal wooden planks.
Stone Pillars, Tiles, and Stone Brick
You can right-click on regular stone tiles/pillars to change it to its snowy variant. They can be changed back by using any type of hoe. However, snowy stone brick must be crafted as shown:
Settlement Blocks cannot be crafted how can be obtained by mining them.
Rune Beacon Blocks cannot be crafted nor mined.
For any stair block, crouch and right-click to change the shape
All Unique Recipies

(Picture of an Illusioner chilling on a frozen river)

Please make sure these options are on when creating your world.

There is also a secret with foxes by the way ;) and it has to do with changing their name and feeding them berries (There's a hint in this addon description)