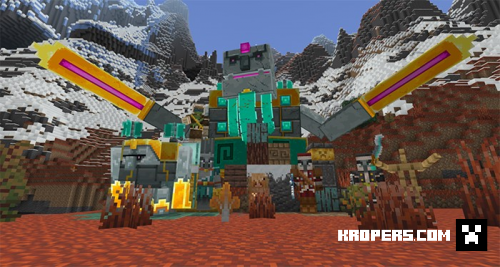 markus
11:39, 30 October 2021
335
0
Welcome to the Pinnacle Expansion Pack! I am back with more Minecraft Dungeons content and this is my biggest one yet. This addon focuses on the mountains of Minecraft and is inspired by the Howling Peaks DLC added to Minecraft dungeons.

This addon brings 5 new mobs, the Windcaller, the Mountaineer, the Wooly Cow, the Squall Golem, and a new boss, the Mistral Golem.

The Windcaller is an illager that harnesses the power of the wind.
Attacks
He has 2 attacks, long-range he spins his staff around and lifts up targets into the air causing them to take fall damage. If you get too close he will blast his targets away.
Behaviors
He floats instead of walking causing him to be a little bit faster than most illagers and spawns randomly throughout the hills. Drops the Updraft Tome.
Health
Windcaller - 24

Slightly larger than the normal Mountaineer and wields the illager banner.
Behavior
Spawns as the captain of Rampart Outpost (similar to pillager outpost) and Mountaineer Patrols. Killing the Rampart Captain will give you a bad omen effect.
Health
Rampart Captain - 36

The wooly cow is the first mob to be ported from MC Earth to MC Dungeons and is supposed to represent the Highland Cattle.
Behavior
Spawns only in the mountains and behaves like a normal cow. However, it can be sheared for brown wool and shakes to grow it back later. Drops leather, wool, and raw beef.
Health
Wooly Cow - 15

The Squall Golem is a  golem-like mob made of stone, gold, and a jade color block on its back. (You can also stack other Squall Golems on it)
Attacks
The Squall golem will chase you until it gets close enough and from there will do a smash attack dealing 16 damage.
Behavior
The golem only spawns in the Gale Sanctum but is always deactivated. However, if a nearby resonance crystal activates the squall golem will awaken. The golem can also be awakened by the Tempest Golem itself. Drops gold and stone bricks. It is mostly stationary
Health
Squall Golem - 100

Attacks
The Tempest Golem has 3 attacks, if close enough the shields protecting its shard will swing out at the player dealing damage.
Behavior
The golem will only spawn in the Tempest Golem's Chamber within the Gale Sanctum, however, it is deactivated. You must awaken it by pressing the button right in front of it. The golem does not move ever and to defeat it you must survive in both Wind pillars long enough to deactivate both arms and stun it. Drops gold ingots, stone bricks, and the Tempest Knife

The tempest knife is very different apart from its counterpart in the Dungeons version. It deals 6 attack damage, but when right-clicked on, lightning will spawn on the nearest mob. Warning, do not use this with no mobs around or else lightning will spawn on you. You can find this in the creative inventory with the swords.
Dropped by the Mistral Golem

(Does not spawn like this in-game)
The Updraft Tome is a book that harnesses the power of the wind. When right-clicked on it will lift up a nearby mob in the air. Can spawn in the Gale Sanctum chest
Dropped by the Windcaller

Normal - 1 Damage
Upgraded - 3 Damage
Diamond - 4 Damage
Even though they are mainly referred to as a pick the game identifies them as an axe. The Axe is wielded by the Mountaineer but can spawn in the Gale Sanctum's chest and the rampart outpost. Currently has no use.
Dropped by the Mountaineer (Sometimes)

(Does not spawn like this in-game)
The wind horn is a horn that when blown will push all nearby mobs away. It can spawn in a sanctum Treasure chest and the rampart outpost. Once goats are added this will be craftable.
Dropped by the Mountaineer (Sometimes)

Gale Sanctum
The Gale Sanctum is a rare structure that only spawns in the mountains. There are multiple chests that spawn inside but you can challenge for the reward chest and defeat the Squall Golems that spawn inside. Underneath the Sanctum lies the Tempest Chamber.
Tempest Chamber
This arena holds the Tempest Golem as well as 6 squall golems. There are Wind Pillars nearby to help you defeat the Tempest Golem.
Rampart Outpost
This is where the Mountaineers lie and if you survive making your way to the top you will be met with the Rampart Captian and chest filled with Rugged Climbing Gear
This was originally planned to have actual walls spawn connecting to the outpost but will be saved for later when Minecraft fixes structure generation.
Highland Temple
Windswept Tree
Uses Windswept wood, logs, and leaves
Highland Pillars
Forms all over the mountain biome and can spawn with either gold or a brazier orb on top.

Nearly all the blocks used in this add-on
All these textures were ported straight from MC Dungeons I do not own any of these :)
Highland Grass
When clicked on with Black Andesite it will change to a grass path with stone.
In order to change a highland grass path back, you must click it with a Wooden Shovel
Windswept Wood
Can be used to make Windswept Wood which can be used and crafted with like normal wooden planks.
Black Andesite
When smelted converts to Smooth Black Andesite
Can be crafted in a 2 by 2 to make Black Andesite Bricks
Black Andesite Bricks can be used to make Carved Creeper Black Andesite
For any stair block, crouch and right-click to change the shape
All Unique Recipies
Wind Pillar
Similar to its dungeons counterpart, once you step inside the pillar activates and you must stay inside long enough to deactivate it. Don't worry, if you get knocked out you will still have some time left before it resets but you gotta be fast. The Wind Pillar is used to help you defeat the Tempest Golem in battle.
(Picture of a Zombie at the peak of a mountain wearing climbing gear)

Please make sure these options are when creating your world.